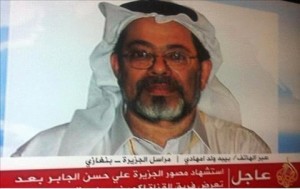 Al-Jazeera says a cameraman for the pan-Arab satellite station has been killed near the eastern Libyan city of Benghazi.

It was the first death of a journalist since the Libyan uprising began on Jan. 15.

The station identified the slain journalist as Ali Hassan al-Jaber but did not specify his nationality. It said he was killed in what it called an “armed ambush” on an Al-Jazeera crew in the Hawari area near Benghazi, which is the headquarters of the rebellion seeking to oust Libyan leader Moammar Gadhafi.

The station said Saturday a correspondent was also wounded.

It did not say who it thought was behind the attack.

Most of eastern Libya remains under rebel control, though pro-government forces have retaken territory in the past several days.