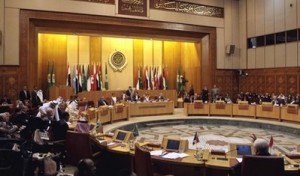 The Foreign Ministers of the Arab League meeting in Cairo intend to ask the UN to impose a no-fly zone in Libya, according to diplomatic sources..

Tripoli’s representatives were absent from the meeting.

According to the sources the aim of the no-fly zone is to prevent Muammar Gaddafi’s jets from targeting the rebels .

Arab League ministers met in Egypt Saturday to discuss the provision of “no-fly” zone over Libya to press Libyan leader Moammar Gadhafi to end his military’s deadly airstrikes against rebels.

The European Union’s foreign-policy chief, Catherine Ashton, says she will travel to Cairo to discuss Libya’s situation with the Arab League and to review the effectiveness of sanctions on Tripoli.

This evening, a meeting is scheduled in Cairo between Secretary General Amr Moussa and the Head of EU diplomacy, Catherine Ashton, to discuss Libya’s situation with the Arab League , to review the effectiveness of sanctions on Tripoli and to develop a common strategy .

The African Union says it has formed a delegation to work with Libyan officials on resolving the country’s crisis. The delegation includes leaders from South Africa, Mauritania, Uganda, Mali and the Democratic Republic of Congo.

U.S. President Barack Obama said Friday that he has not excluded any options in considering a possible response to Gadhafi’s crackdown on domestic opponents.

The International Committee of the Red Cross says it is apparent that Libya is now in a state of civil war. The U.N. says the conflict already has killed more than 1,000 people and forced more than 250,000 people to flee their north African homeland.

As the Arab League was meeting to discuss violence in Libya and Yemen against civilians who are vigorously trying to oust their governments there was a sit-in of mostly Yemeni and Libyans who were in front of the headquarters, Amr Moussa, chanting “Where’s the Arab nation?” “Where is Amr Moussa?” “The Libyan people await your decision.”

The protesters, who were supported by Arab nationals from various countries, called on the Arab League to declare a firm stance in support of those demanding reform and stop the bloodshed in the two “sister countries.”

Moussa, then met with representatives of the 17 February youth from Libya.

“We come from Libya bearing the Transitional National Council’s authorisation to meet with the Arab League’s secretary general to convey our demands to the Arab foreign ministers and urge them to take deterrent decisions against the Gaddafi regime and stop the bloodshed,” stated Tahany Sulaiman Al Mubarak, from the 17 February youth prior to the meeting.

“We asked the secretary general to recognise the transitional council presided by Mostafa Abdul-Jalil, and to raise the Libyan flag of independence as opposed to the present one,” she added.