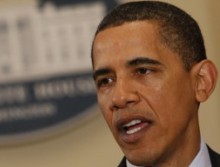 U.S. President Barack Obama said on Friday he has been in close contact with Middle East leaders amid ongoing unrest in the region and emphasizes to them the need to reform and to allow peaceful protests.

“I’ve had a fairly consistent message to all of them. Number one, the United States believes in the right of peaceful protests and the ability of ordinary people to express their grievances to their government,” Obama said at a news conference.

“It is in the interest of the entire region to reform itself both politically and economically so that the incredible talents of young people throughout that region can be tapped.”

As political unrest raged in and across North Africa and the Middle East, from Morocco to Iran, Obama said he had been pushing the economic case for embracing change.

“My consistent message to leaders in the region is that, this process of change can be a great opportunity for the Middle East,” he told reporters in Washington.

“Because if you can tap into the talents of the young people, then you can start seeing the kind of economic growth in that region that you have started to see in other places in the world.”

“There’s no reason why countries in the Middle East shouldn’t have the same kind of growth rates that you are seeing in China and India.”

Protests have erupted across the Middle East demanding reforms following the fall of the Tunisian and Egyptian regimes earlier in the year. Reuters, AFP