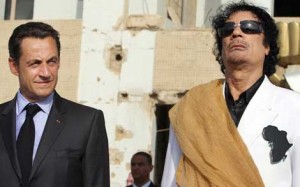 The embattled Libyan regime announced the suspension on Friday of its diplomatic relations with France, the only Western country that has recognised the rebel council in Benghazi fighting to oust Muammar Gaddafi from power.

France’s European Union partners have not followed Paris’s lead and an EU summit in Brussels on Friday stopped short of deciding on backing a no-fly zone or other military measures against Gaddafi.