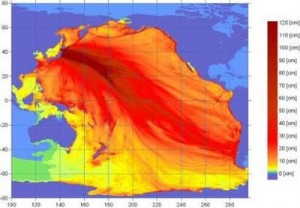 The strongest earthquake ever to hit Japan Friday unleashed a terrifying 10-metre tsunami that claimed hundreds of lives, with a nuclear plant and petrochemical complex among multiple sites set ablaze.

The monster wall of water generated by the 8.9-magnitude quake — the seventh biggest in history — pulverised the northeastern city of Sendai, where police reportedly said that 200-300 bodies had been found on the coast.

The 10-metre (33-foot) wave of black water sent shipping containers, cars and debris crashing through the streets of Sendai and across open farmland, while a tidal wave of debris-littered mud destroyed everything in its path.

More than 90 people were confirmed killed in addition to the bodies found on the Sendai coast, public broadcaster NHK reported.

“The damage is so enormous that it will take us much time to gather data,” an official at the National Police Agency told AFP.

The wave set off tsunami alerts across the Pacific, including in the US state of Hawaii. A Japanese ship with 100 people aboard was reportedly carried away while more than 300 houses were destroyed in the remote city of Ofunato.

“It was the biggest earthquake I have ever felt. I thought I would die,” said Sayaka Umezawa, a 22-year-old college student who was visiting the port of Hakodate, which was hit by a two-metre wave.

The government said the tsunami and quake, which was felt in Beijing some 2,500 kilometres (1,500 miles) away, had caused “tremendous damage”, while aerial footage showed massive flooding in northern towns.

The quake, which hit at 14:46 pm (0546 GMT) and lasted about two minutes, rattled buildings in greater Tokyo, the world’s largest urban area and home to some 30 million people.

In Tokyo, millions who had earlier fled swaying buildings were stranded far away from home in the evening after the earthquake shut down the capital’s vast subway system. The mobile phone network was strained to breaking point.

The government used loudspeaker alerts and TV broadcasts to urge people to stay near their workplaces rather than risk a long walk home, as highways leading out of the city centre were choked and hotels rapidly filled up.

There was also major disruption to air travel and bullet train services. A passenger train with an unknown number of people aboard was unaccounted for on a line outside Sendai, Kyodo News reported.

The government insisted there was no risk of radiation leaking from Japan’s network of advanced nuclear power plants, which are designed to shut down as soon as the earth shakes in one of the world’s most quake-prone countries.

But authorities ordered 2,000 residents living by a nuclear plant in Fukushima, south of Sendai, to evacuate after a reactor cooling system failed. A fire broke out in the turbine building of another nuclear plant in Onagawa.

The tsunami also reached Sendai airport, submerging the runway while a process known as liquefaction, caused by the intense shaking of the tremor, turned parts of the ground to liquid.

“I’ve never seen anything like this,” said Ken Hoshi, a local government official in Ishinomaki, a port city in Miyagi prefecture, where Sendai is located.

Hours after the quake struck with devastating force, TV images showed huge orange balls of flame rolling up into the night sky as fires raged around a petrochemical complex in Sendai.

A massive fire also engulfed an oil refinery in Iichihara near Tokyo as the quake brought huge disruption to Japan’s key industries. Tokyo share prices plummeted and the yen was down against the dollar.

The Pacific Tsunami Warning Centre issued a widespread warning for territories as far away as South America, New Zealand and Hawaii, where people were ordered to evacuate coastal areas.

But several countries in the tsunami’s path reported only minor waves.

The first quake struck just under 400 kilometres (250 miles) northeast of Tokyo, the US Geological Survey said. It was followed by more than 40 aftershocks, one as strong as 7.1.

“We were shaken so strongly for a while that we needed to hold on to something in order not to fall,” said an official at the local government of the hardest-hit city of Kurihara in Miyagi prefecture.

“We couldn’t escape the building immediately because the tremors continued… City officials are now outside, collecting information on damage,” she told AFP by telephone.

Prime Minister Naoto Kan quickly assembled his cabinet after the quake hit, and the government dispatched naval vessels from near Tokyo to Miyagi.

US President Barack Obama led international offers of sympathy and aid in what he called Japan’s “time of great trial”, while the Kan government called on help from US forces stationed in the country.

Japan sits on the “Pacific Ring of Fire”, which is dotted with volcanoes, and Tokyo is in one of its most dangerous areas where three continental plates are slowly grinding against each other, building up enormous seismic pressure.

The government’s Earthquake Research Committee has warned of a 70 per cent chance that a great, magnitude-eight quake will strike within the next 30 years in the Kanto plains, home to Tokyo’s vast urban sprawl.

The last time a “Big One” hit Tokyo was in 1923, when the Great Kanto Earthquake claimed more than 140,000 lives, many of them in fires. In 1855, the Ansei Edo quake also devastated the city.

More than 220,000 people were killed when a 9.1-magnitude quake hit off Indonesia in 2004, unleashing a massive tsunami that devastated coastlines in countries around the Indian Ocean as far away as Africa.

However, small quakes are felt every day somewhere in Japan and people take part in regular drills at schools and workplaces to prepare for a calamity.

Photo: An energy map provided by the National Oceanic and Atmospheric Administration (NOAA) shows the intensity of the tsunami caused by the magnitude 8.9 earthquake which struck Japan on March 11, 2011.