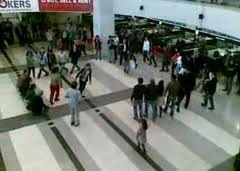 Forget the long boring waits and your average airport experience. At Beirut’s Rafic Hariri International Airport, it’s apparently a party. The airport sprang to life a couple of days ago when travelers and members of the airport staff all of a sudden joined hands and started dancing to traditional Arabic music and modern tunes in the airport hall, according to amateur video footage posted on YouTube.

“Beirut’s Rafic Hariri Intl. Airport came to life when I saw employees, security staff and passengers of all ages dancing to a mix of Lebanese folk & modern dance music! Gotta love the Lebanese spirit!,” said a description of the video.

In the clip, said to have been filmed at the airport on March 5, some people are also seen pulling what appears to be break dance moves and doing cartwheels on the floor as more and more bystanders join the dancing crowd.

Talking about spicing up your airport experience.