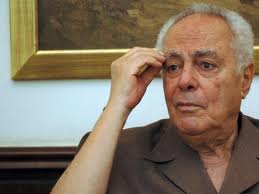 “This is a planned, methodical and deliberate process,” Dr. Yehya El Gamal told reporters in Cairo today. “Some of the countries in the region and internationally don’t want Egypt to remain strong.” He didn’t identify the countries to which he was referring.

The government has been urging Egyptians to end protests, resume work normally and cooperate with police as the country suffers from a crime wave, sectarian tensions and slowing growth. Two people died and 15 were injured in clashes between Muslims and Copts in Cairo, BBC Arabic reported yesterday.

“We want productivity to resume and we want foreign investments,” El Gamal said.

Police melted away in the early days of mass protests that led to Mubarak’s ouster last month after three decades in power. The Cabinet said in a statement yesterday that it is expediting efforts for police forces to fully redeploy. Bloomberg