Libyan rebels beat back the fiercest attack so far by Muammar Gaddafi’s forces on the town of Misrata, residents told Reuters on Sunday, and a doctor said at least 18 people were killed.

Government forces used tanks and artillery in what appeared to be their most concerted effort yet to retake the town, 200 km (125 miles) east of the capital Tripoli, but were pushed back by rebels fighting Gaddafi’s 41-year old rule.

“Today Misrata witnessed the toughest battle since the beginning of the revolution. Horrible attacks,” one resident, who did not want to give his name, told Reuters by phone.

“They came from three sides and managed to enter the town from the west and south but when they reached the center of Misrata the rebels pushed them back,” he said. 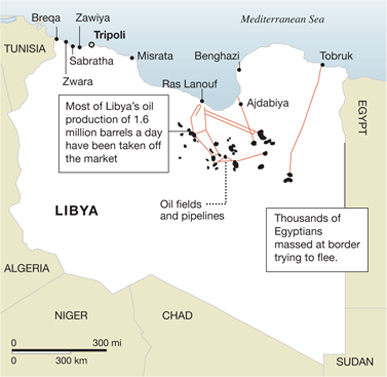 Another Misrata resident said Gaddafi’s forces had retreated to a military airbase 7 km (4 miles) from the town.

Misrata, with a population of about 300,000, is the largest town controlled by Gaddafi opponents outside the rebel-held east of the country.

If rebel soldiers are able to continue their fitful advance westwards, Misrata could be a stepping stone to reaching the capital, Gaddafi’s principal stronghold.

“The revolutionaries captured 20 soldiers and seized a tank. The town is now fully in the control of the youths,” the second resident said.

A doctor at Misrata’s main hospital said at least 18 people, including a baby girl, had been killed in the attack.

“Today the attack was fierce, I have not seen anything like that in my whole life,” he said. “We have 18 martyrs but the figure is not final. We also have many people wounded, I cannot even count them.”

Gemal, a local rebel spokesman, said tens of thousands of people gathered in central Misrata to celebrate the rebels’ victory.

“Morale is very high, people are more confident now that they have pushed Gaddafi’s forces back. Everybody took part in this battle, young men but also old ones,” he said.

A video posted by rebels on the web showed cheering people demonstrating their support for the insurgents with banners reading “Libya remains free” and “The End.” One man held a placard with Gaddafi’s picture saying: “I rule you or I kill you.”

Residents said that by early evening, the situation was calm but rebels were still searching the town for any remaining pro-Gaddafi forces.

“You can feel the tension in the city, rebels are searching the streets, the squares and the alleys to see if there are any hidden mercenaries,” said one man who was coming back from the funeral of a neighbor killed in the fighting.

“We just buried him now, he is a martyr and will go to heaven, but Gaddafi and his people will not even smell heaven,” he said, crying.

Other residents in Misrata, which has been under rebel control for over a week, said the government attack was led by units of a militia led by Khamis, a son of the Libyan leader.

“They are destroying everything they find. They are using artillery and tanks,” said a man who gave his name as Mohamed.

Until now there had only been skirmishes on the outskirts of the city, with residents reporting occasional outbreaks of fighting around the airport and at the nearby air base.