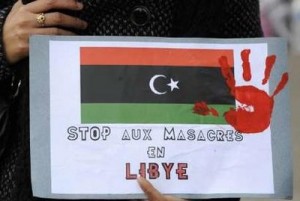 Forces loyal to embattled Libyan leader Moammar Gadhafi were accused by a doctor of perpetrating a “massacre” during fierce fighting on Saturday in the strategically vital city of Zawiyah.

“This was a real massacre. The situation is catastrophic. They killed many people. They killed my daughter,” the doctor told AFP on the telephone from Zawiyah, 60 kilometres west of Tripoli.

Battles raged in Zawiyah as besieged rebels in the city centre fought back against two separate offensives launched by pro-Gadhafi forces, who witnesses said fired on civilians.

The loyalists rained tank shells and machine-gun fire on Zawiyah as they sought to retake the city from rebels.

“The tanks are all over the city and shooting at houses. … The shelling isn’t stopping,” a resident told AFP in the city, which anti-regime forces have controlled since Feb. 27.

“Pray for us,” he said before the call was abruptly cut off.

Other witnesses and medics said on the phone that Zawiyah was still in rebel hands, but under siege by loyalist troops following a dawn assault followed by another late in the afternoon.

The death toll was at least seven but was expected to rise.

“At least seven people were killed in the offensive launched this morning by two battalions on the city and there are dozens of wounded,” a doctor told AFP on condition of anonymity.

“What happened this morning is horrible. The mercenaries opened fire on anyone who dared go outdoors, even on children,” said the doctor, appealing for help.

“At the hospitals we lack everything. We need help,” said the doctor.

A resident stressed that, despite the heavy assault Saturday, rebels were still in control.

“There were two offensives. The Khamis battalion (normally commanded by one of Gadhafi’s sons) struck from the east of the city and the Hosban battalion struck from the west,” he said. “The resistance (rebels) killed many people and captured many enemy forces,” he said, adding that he was in a “state of shock.”

A resident, also reached by telephone, said the rebels pushed the pro-Gadhafi troops out of Zawiyah.

“Three soldiers were trapped in an apartment in the town. One of them committed suicide and the other two were taken prisoner by the revolutionaries,” he added. Gazette