by yalibnan
710
The Arab risings have revealed that Iran’s revolutionary ideology has not only been rendered bankrupt at home, but it has also lost the war of ideas among its neighbors.
Share: 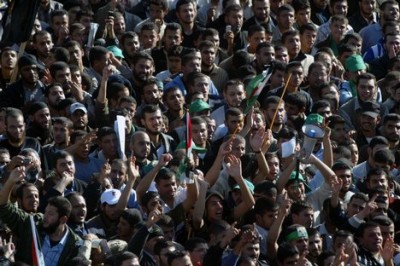 IN “Garden of the Brave in War,” his classic memoir of life on a pomegranate farm in 1960s Iran, the American writer Terence O’Donnell recounts how his illiterate house servant, Mamdali, would wake him every morning with a loud knock on the door and a simple question: “Are you an Arab or an Iranian?”

“If I was naked,” O’Donnell explained, “I would answer that I’m an Arab and he would wait outside the door, whereas if I was clothed I would reply that I was an Iranian and he would come in with the coffee.” This joke went hand in hand, O’Donnell wrote, with an age-old chauvinism that depicted the Persians’ Arab neighbors as “uncivilized people who went about unclothed and ate lizards.”

The Islamist victors of the 1979 Iranian revolution intended to change things, to replace the shah’s haughty Persian nationalism with an Arab-friendly, pan-Islamic ideology. Yet Tehran’s official reaction to the 2011 Arab awakening shows that, at the heart of the Islamic Republic of Iran’s Middle East strategy, there lays a veiled contempt for Arab intelligence, autonomy and prosperity.

What many young Iranians see as a familiar struggle for justice, economic dignity and freedom from dictatorial rule, Iranian officialdom has struggled to spin as a belated Arab attempt to emulate the Islamic revolution and join Tehran in its battle against America and Israel.

The delusions of the Iranian regime are partly attributable to a generation gap. Tehran’s ruling elite continue to cling to the antiquated ideology of Ayatollah Ruhollah Khomeini, whose worldview was formed by decades of imperial transgressions in Iran. The demographic boom in the Middle East, however, has brought a wave of young Arabs and Iranians who associate subjugation and injustice not with colonial or imperial powers, but with their own governments.

Until now, Iran’s interests have been served by the Arab status quo: frustrated populations ruled over by emasculated regimes incapable of checking Israel, and easily dismissed as American co-dependents. A conversation I once had with a senior Iranian diplomat is instructive.

He complained, justifiably, about Washington’s excessive focus on military power to solve political problems. I posed a simple hypothetical: What if, instead of having spent several billion dollars financing Hezbollah, Hamas and Islamic Jihad over the past three decades, Iran had spent that money educating tens of thousands of Palestinians and Lebanese Shiites to become doctors, professors and lawyers? Wouldn’t those communities now be much better off and in a much stronger position to assert their rights vis-à-vis Israel?

“What good would that have done for Iran?” he responded candidly. (He himself had a doctorate from a British university.) “Do you think if we sent them abroad to study they would return to southern Lebanon and Gaza to fight Israel? Of course not; they would have remained doctors, lawyers and professors.”

Iran, in essence, understands that it can inspire and champion the region’s downtrodden and dispossessed, but not the upwardly mobile. Its strategy to dominate the Middle East hinges less on building nuclear weapons than on the twin pillars of oil and alienation.

Iranian petrodollars are used to finance radicals — Khaled Meshaal in Syria, Hassan Nasrallah in Lebanon and Moktada al-Sadr in Iraq, to name a few — who feed off popular humiliation. As an Arab Shiite friend once complained to me, “Iran wants to fight America and Israel down to the last Palestinian, Lebanese and Iraqi.”

At first glance, the fall of Western-oriented Arab governments may appear to be a blow to Washington and a boon for Tehran. The seeming consensus among Western analysts and pundits — that Iran will fill the Middle East power vacuum — is short-sighted.

While the relationship between Egypt and Iran — the regions two oldest and most populous nations — will likely improve, the competition between them will likely intensify.

Tehran’s ascent in the Arab world over the last decade has been partly attributable to Cairo’s decline. The potential re-emergence of a proud, assertive Egypt will undermine Shiite Persian Iran’s ambitions to be the vanguard of the largely Sunni Arab Middle East. Indeed, if Egypt can create a democratic model that combines political tolerance, economic prosperity and adept diplomacy, Iran’s model of intolerance, economic malaise and confrontation will hold little appeal in the Arab world.

Renewed Iranian influence in places like Bahrain and Yemen may also prove self-limiting. As we have seen in Iraq, familiarity with Iranian officialdom often breeds contempt. Polls have shown that even a sizable majority of Iraq’s Shiites resent the meddling in their affairs by their co-religionists from Iran. “The harder they push,” said Ryan Crocker, a former United States ambassador to Iraq, “the more resistance they get.”

Elsewhere in the Arab world, Iranian proxies like Hezbollah will increasingly find themselves in the awkward position of being a resistance group purportedly fighting injustice while simultaneously cashing checks from a patron that is brutally suppressing justice at home.

The Arab uprisings of 2011 will also, of course, have their effect on Iran internally. Iranian democracy advocates have long taken solace in the belief that they were ahead of their Arab neighbors, who would one day too have to undergo the intolerance and heartaches of Islamist rule. The largely secular nature of the uprisings in Egypt and Tunisia have bruised the Iranian ego: were they the only ones naïve enough to succumb to the false promise of an Islamic utopia?

It has been said about authoritarian regimes that while they rule their collapse appears inconceivable, but after they’ve fallen their demise appears to have been inevitable. In the short term Tehran’s oil largesse and religious pretensions have seemingly created for it deeper, if not wider, popular support than many Arab regimes.

But the regime’s curiously heavy-handed response to resilient pro-democracy protests — including the recent disappearance of opposition leaders Mir Hussein Mousavi and Mehdi Karroubi — betrays its anxiety about the 21st-century viability of an economically floundering, gender-apartheid state led by a “supreme leader” who purports to be the prophet’s representative on Earth.

Tehran publicly cheered the fall of Egyptian and Tunisian regimes undone by corruption, economic stagnation and repression. Do its rulers not know that Iran — according to Transparency International, Freedom House and the World Bank — ranks worse than Tunisia and Egypt in all three categories?

A saying often attributed to Lenin best captures the sorts of tectonic shifts taking place in today’s Middle East. “Sometimes decades pass and nothing happens; and then sometimes weeks pass and decades happen.”

The uprisings may not all end happily. As history has shown time and again — notably in Iran in 1979 — minorities that are organized and willing to use violence can establish reigns of terror over unorganized or passive majorities. Whatever ensues, however, the Arab risings have revealed that Iran’s revolutionary ideology has not only been rendered bankrupt at home, but it has also lost the war of ideas among its neighbors.