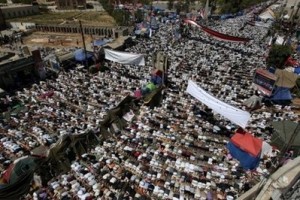 Yemeni soldiers opened fire on an anti-government protest in the country’s north, killing at least four people and wounding around seven others, as demonstrations against president Ali Abdullah Saleh continued.

Soldiers fired rockets and artillery at protesters in Semla, a village in the northern province of Amran on Friday, sources said. The area, about 170km from the capital Sanaa, is a Houthi stronghold.

“During a peaceful protest this Friday morning … demanding the fall of the regime, an end to corruption and political change, a military site fired rockets at a group of protesters and hit dozens of people,” Houthi rebels, named after their leader Abdel Malek al-Houthi, said in a statement.

Meanwhile, president Saleh on Friday rejected a proposal by opposition groups that offered him a smooth exit from power by the end of 2011.

“The president rejected the proposal and is holding on to his previous offer,” Yemen’s opposition’s rotating president

Saleh, who has been in power for 32 years, refuses to step down until his term ends in 2013.

Yemen has been rocked for weeks by daily protests against the government. The Houthi’s, who say they are discriminated against by authorities, announced their support for anti-government protests in early February.

Pro and anti-government protesters continued to gather in the capital on Friday.

“We have two huge gatherings at the same time,” Al Jazeera’s Ahelbarra said. “At the campus of Sanaa’s university, thousands gathered after the Friday prayer.”

“They are saying they will continue the fight and that they would like to push for dramatic change in the country, including the departure of president Ali Abdullah Saleh and his political elite,” he said.

At the same time, in the city’s Tahrir Square “thousands of government supporters took to the streets, denouncing the [anti-government] protesters, saying that they are dragging the nation into chaos and anarchy,” our correspondent reported.

Anti-government protesters wholly reject Saleh’s promised statements that he will step down after national elections in 2013.

The proposal, rejected by president Saleh on Friday, was made this week by a coalition of opposition groups and religious scholars.

It sought to end the country’s political crisis, calling for a “peaceful transition of power” from Saleh by the end of this year. It also called for a probe into the deadly crackdown on the recent anti-government protests.

“The opposition and the president are embroiled in a war of words. Each has a proposal and each proposal was rejected by the other side,” our correspondent said earlier on Friday.

Saleh “has slammed all attempts to resign within six months” Ahelbarra added, saying the president intended to remain in power until his term ended.

Saleh did agree to a reform plan proposed by religious leaders earlier this week which would revamp elections,

parliament and the judicial system, the Reuters news agecy reported.

The proposal by the opposition also called for steps to change the constitution and rewriting election laws to ensure fair representation in parliament, removing Saleh’s relatives from leadership positions in the army and security forces, and a guaranteed right to peaceful protest.