Libyan Rebels: Tripoli is next target 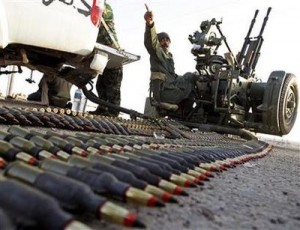 Forces loyal to Muammar Qaddafi used tear gas and gunfire to suppress protests in Tripoli, as rebels pushed their front lines westward to Ras Lanuf, an oil port town about halfway to the capital from opposition- stronghold Benghazi.

In a day that saw some of the most widespread fighting so far, government forces moved against Zawiyah, the main opposition-held city west of Tripoli, according to Al Jazeera television. At least 18 people were killed, including the city’s top rebel commander, according to the Associated Press.

In the other direction, there were clashes along the coast of the Gulf of Sidra, where opposition fighters claimed control of Ras Lanuf, about 400 miles (650 kilometers) from Tripoli, according to Al Jazeera. Rebels found 20 handcuffed corpses at the military base in town, Al Jazeera said.

Oil rose to a 29-month high in New York on concern that the unrest in Libya will spread to other regional oil producers. Qaddafi’s son, Saif, told Al Jazeera in a lengthy interview that the opposition doesn’t represent the majority of Libyans and that the air force bombed rebel-held Brega, near Ras Lanuf, only to keep opposition fighters away from oil facilities, not to kill them.

Qaddafi “can prolong this battle for weeks,” Shashank Joshi, associate fellow at the Royal United Services Institute for defense and security studies in London, said today in a telephone interview. “Only if he escalates it will he face intervention. He knows this is on the boil very slowly.”

The opposition forces’ spokesman, Abdullah Al Mahdi, said 6,000 people have died since anti-Qaddafi protests began Feb. 16 in Benghazi, compared with the 1,000 estimate that has been cited by the United Nations. He didn’t indicate the basis for his higher figure.

Al Mahdi, a colonel who defected from Qaddafi’s military said the rebels will next target Tripoli.

In the capital, security forces moved quickly to break up demonstrations after Friday prayers. They used tear gas followed by live ammunition, witnesses told the AP. It wasn’t clear whether they shot at protesters or fired into the air as the crowds scattered, AP said.

In Zawiyah, resident Belgassem al-Zawee said rebels repelled an attack by government forces advancing on the western side of the city. Later, snipers perched on rooftops opened fire at unarmed demonstrators marching toward a local hospital treating those wounded in the violence, he said.

“This has been a very, very difficult day,” he said in a telephone interview. “It was horrible.”

Holed up at home, Zawiyah residents are hearing intermittent gunfire and news that tanks surround the city, he said. “We are living in horror; our children are terrified.”

In Ras Lanuf, some pro-Qaddafi units withdrew after a split within the government forces during the battle with rebels, Al Jazeera said. The government denied losing control of Ras Lanuf. The town has a tanker terminal that exports about 200,000 barrels of oil a day as well as Libya’s biggest refinery, with a capacity of 220,000 barrels a day, more than half the country’s total, according to the International Energy Agency.

Crude oil for April delivery increased $2.51 to $104.42 a barrel on the New York Mercantile Exchange, the highest settlement since Sept. 26, 2008. The contract rose 6.7 percent this week, the third straight advance, and is up 30 percent from a year ago.

Fighting in Misrata, a town about 90 miles east of Tripoli that was under opposition control, left at least 33 dead and 120 injured, a witness told Al Arabiya.

Hospital officials said at least 17 people were killed at an explosion at an ammunition depot near Benghazi. The cause of the blast was unclear.

More than 200 volunteers in rebel military garb staged a parade today in Benghazi, stomping their feet and chanting, “Long live free Libya.” Women ululated and bystanders clapped as the men marched through the city, Libya’s second biggest, on the eastern shore of the Gulf of Sidra.

“We are being trained by officers,” said Sameh Iskandar, 17. Another participant, Emad Caplan, said he hoped the volunteers would get to defend cities west of Benghazi.

Interpol, the international police organization, issued a global alert, known as an Orange Notice, against Qaddafi and 15 other Libyans, including members of his family and close associates. The notice is “to warn member states of the danger posed by the movement of these individuals and their assets” and to assist member states to enforce United Nations sanctions against them and to aid the International Criminal Court investigation into alleged crimes against humanity in Libya, Interpol said in an e-mailed statement.

More than 150,000 people, most of the foreign workers, have fled Libya to neighboring Egypt and Tunisia since Feb. 19, the UN refugee agency said on March 1, creating a crisis in the border areas. The United States, U.K. and France said they were dispatching aircraft to deliver humanitarian aid and to help move the refugees to their home countries.

President Barack Obama said the U.S. military is ready to protect civilians caught in the conflict. Libyan rebels have called for international enforcement of a no-fly zone over the country, a measure Defense Secretary Robert Gates has described as a “big operation.” Speaking at the White House yesterday, Obama said the U.S. is considering a “full range” of military options and needs to have the capacity to act in a humanitarian crisis.

Libya’s opposition leaders rejected a mediation offer by Venezuelan President Hugo Chavez, an ally of Qaddafi. The Libyan leader’s “hands are tainted with blood and we will not talk to him,” rebel spokesman Mustafa Gheriani said, according to the AP. The Arab League said it was considering Chavez’s plan.

The European Union is considering widening its sanctions on Libya, an EU official said. EU policy makers are discussing imposing the sanctions on more people and the possibility of levying them on organizations as well as individuals, the official said today in Brussels on condition of anonymity.

A ship heading to Libya and believed to be carrying a “significant amount” of Libyan currency subject to UN sanctions was stopped and brought back to Britain two days ago, the U.K. Home Office said today.

‘We Know the West’

When asked about travel bans and asset freezes, Saif al- Islam Qaddafi said on Al Jazeera, “We know the West, we know them very well. When you are strong they are like cats, when you are weak they are like tigers. We don’t pay attention to them.”

Protesters elsewhere in the region resumed their demands for civil rights, higher living standards and the ouster of entrenched autocratic regimes.

In Yemen, an opposition group said two people were killed when security forces attacked protesters in Harf Sufian, north of the capital, Sana’a. Tens of thousands of demonstrators in Sana’a called for an end to President Ali Abdullah Saleh’s three-decade rule, and there were rallies in other cities.

Opposition leaders yesterday presented Saleh with a plan for a transition to democracy this year. About a dozen people have died in more than three weeks of protests.

In Egypt, Prime Minister-designate Essam Sharaf addressed a crowd of thousands in Tahrir Square, saluting the “martyrs” who died in the fight to unseat President Hosni Mubarak and saying he would derive legitimacy from the people. He promised demonstrators to do his best to meet their demands.

Egyptian protesters continued to demand further changes after Mubarak’s Feb. 11 ouster, including a purge of old-regime officials from the government. The ruling military council yesterday bowed to one of their key demands, accepting the resignation of Prime Minister Ahmed Shafik and inviting Sharaf to take his place.

In Bahrain, there were clashes between Shiite and Sunni Muslims in a central town, Reuters reported. The mostly Shiite opposition, representing the majority sect in the Persian Gulf island state, had planned rallies today in Manama, the capital, to demand a transition toward democracy.

Crown Prince Salman bin Hamad Al Khalifa, a Sunni, said dialogue with the opposition must begin “as soon as practically possible” to end more than two weeks of unrest in which at least seven protesters were killed in a security crackdown.

Tunisia, where the Middle Eastern turmoil began two months ago, announced July elections for a national council that will draw up a new constitution. Bloomberg