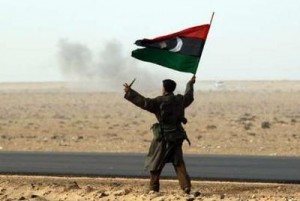 At least 30 people, including a rebel leader, have been reported killed in fierce battles as forces loyal to Libyan leader Moammar Gadhafi launched an offensive Friday to retake a Western city that has been under rebel control for days.

News organizations quote witnesses who say the deaths occurred during clashes in and around Zawiyah, 50 kilometers west of Tripoli. Zawiyah is the closest rebel-held town to the capital. It is unclear which side now controls the town.

Meanwhile, news reports say at least 17 people are dead after a powerful explosion rocked the eastern city of Benghazi late Friday. Reuters news quotes an opposition leader who says Mr. Gadhafi’s forces bombed an arms depot on the outskirts of the city. Opposition activists had rallied in the rebel-held city earlier in the day.

Clashes and battles erupted in several other cities.

Clashes were also said to have erupted between pro and anti-Gadhafi forces in the the eastern oil port of Ras Lanuf.

Earlier Friday, Libyan warplanes carried out a third day of airstrikes — targeting a military base near the eastern rebel-held town of Ajdabiya. Rebels holding the base say there was no damage from the strikes.

Meanwhile, Interpol issued a global alert against Mr. Gadhafi and 15 other Libyan nationals, including some of his family members and close associates. The alert warns member states of the “danger posed by the movement” of the individuals and their assets.

The alert comes after the International Criminal Court announced it had opened a probe against Mr. Gadhafi and some of his associates into possible crimes against humanity.

Libya’s unrest follows waves of demonstrations in other Middle Eastern and North African countries in recent weeks. Anti-government demonstrations have forced the long-time leaders of Tunisia and Egypt to step down. But Mr. Gadhafi has refused to budge, and the conflict in Libya has escalated.

Photo: A rebel fighter holds a Kingdom of Libya flag and a knife during shelling by soldiers loyal to Libyan leader Muammar Gaddafi in a battle near Ras Lanuf, March 4, 2011.

A rebel fighter holds a Kingdom of Libya flag and a knife during shelling by soldiers loyal to Libyan leader Muammar Gaddafi in a battle near Ras Lanuf, March 4, 2011.