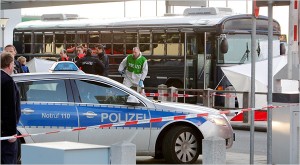 The names of the dead were being withheld pending notification of the families, the officials said. President Obama told reporters in Washington that he was “saddened and outraged” by the attack, and called for the perpetrators to be brought to justice.

The suspected gunman, who is in custody, is 21-year-old Kosovar who lives in Frankfurt, according to a city police spokesman, Manfred Füllhardt.

He said that he busload of airmen had just arrived from England and had boarded the bus to go to the American military base at Ramstein, a few dozen miles to the southwest of the Frankfurt Airport.

The suspect argued with some of the airmen before shooting one who was standing in the open door as well as the driver, Mr. Füllhardt said. The suspect was captured by a Hesse state police officer who was at the airport, which typically has heavy security especially following warnings in recent months that Germany would be a terror target.

The dark blue-gray bus had regular German license plates in line with military policy to make vehicles less conspicuous but could probably still be identified as US because it does not look like a typical German bus.

The attack occurred outside Terminal 2 at the airport, one of Europe’s busiest, which has been under increased security in recent months, following warnings that Germany would be the target of terrorist attacks. In the aftermath of the shooting, the area was rapidly cordoned off, but the terminal continued operations.

Mr. Füellhardt said that the dark blue-gray bus had regular German licence plates, in line with American military policy to make vehicles less conspicuous, but that it still probably stood out from German vehicles. The busload of airmen had just arrived from England, he said, and had boarded the bus to go to the American military base at Ramstein, which lies few dozen miles to the southwest of the Frankfurt Airport.

The suspect argued with the airmen before shooting one who was standing in the open door and the driver, Mr. Füllhardt said.

The Ramstein base is one of several major United States military installations in the Frankfurt region that serve as logistical hubs for operations in Afghanistan and Iraq. American service members frequently use the Frankfurt airport, either to head to those bases or en route to others.

Chancellor Angela Merkel spoke about the attack in Berlin, according to Reuters, saying: “We don’t know the details but I would like to express how upset I am. We have to do everything we can to find out what happened.”

The state interior minister, Boris Rhein, told reporters at the scene that security had been tightened and investigators were trying to ascertain exactly what happened.

A man whose office is near the site of the shooting said it was an area where buses load arriving passengers. Speaking on condition of anonymity to protect his business, he said witnesses told him that the gunman first talked to the military personnel to find out who they were and then opened fire, shouting “God is great” in Arabic.

In 1985, a bomb exploded at a crowded departure lounge at the Frankfurt Airport, killing a man and two children and injuring 42 people, four seriously.