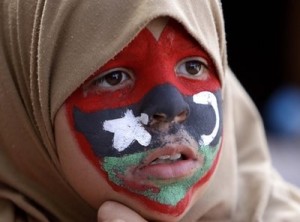 Residents of the rebel-held city closest to Libya’s capital passed out sweets and cold drinks to fighters Tuesday and celebrated with a victory march after they managed to repel an overnight attack by forces loyal to longtime leader Moammar Gadhafi.

The rebels have been fighting to consolidate their gains as the international community weighs new moves to isolate the longtime Libyan leader, including the possibility of creating a no-fly zone over Libya. But Gadhafi loyalists have made several advances to try to reclaim areas close to his main stronghold of Tripoli.

Secretary of State Hillary Rodham Clinton warned that Libya is at risk of collapsing into a “protracted civil war” amid increasingly violent clashes between the two sides.

Witnesses in Zawiya said pro-Gadhafi forces battled rebels for six hours overnight but could not retake control of the city 30 miles (50 kilometers) west of Tripoli. They said the last of several assaults by the Gadhafi loyalists came at around 3 a.m. local time.

“Allahu Akbar (God is Great) for our victory,” residents of Zawiya chanted as they paraded through the city’s main square. Some carried on their shoulders an air force colonel they said had just defected to the rebels’ side.

“We were worried about air raids but that did not happen,” said one resident, who spoke on condition of anonymity for fear of reprisals.

The Zawiya rebels, who include mutinous army forces, are armed with tanks, machine guns and anti-aircraft guns. They fought back pro-Gadhafi troops, armed with the same weapons, who attacked from six directions. There was no word on casualties.

Photo: A young anti-Libyan Leader Moammar Gadhafi protester with her face painted in the colors of the old Libyan flag during a protest at the court square, in Benghazi, Libya, on Tuesday March 1, 2011.