“Day of rage” in Yemen, clashes in south 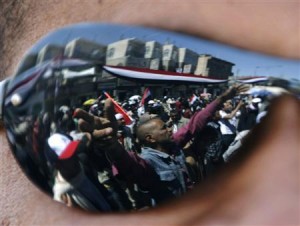 Tens of thousands of protesters flooded Yemen’s streets on Tuesday in a “Day of Rage,” demanding an end to the president’s three-decade rule.

In the capital Sanaa, demonstrators chanted “With blood and soul we support you, Aden,” referring to the southern port city where most of the 24 people killed in the past two weeks of protests have died.

Some demonstrators flashed “V” for victory signs while others wore white headbands with “Leave” written in red — a message addressed to President Ali Abdullah Saleh.

Tens of thousands more marched through the streets of Ibb and Taiz, south of Sanaa.

Already rocked by separatism and an al Qaeda insurgency, Yemen has been one of the Arab nations most shaken by a wave of popular protests sweeping across North Africa and the Middle East.

Saleh, a U.S. ally against Islamist militants, has failed to quell two months of protests in a country of 23 million where 40 percent live on less than $2 a day and a third are undernourished.

On Monday he offered talks to form a unity government but the opposition spurned the proposal. On Tuesday, Saleh replaced the governors of five mostly southern provinces at the centre of the protests, state media reported.

“Victory is coming and it is near,” Hassan Zaid, an opposition leader, shouted to the protesters gathered in Sanaa, where they have been camping out for two weeks. “We have one goal and one demand, and that is the quick end of the regime.”

Protesters are angry at widespread corruption, as Yemeni university graduates struggle to get jobs without connections, and youth unemployment is high. Northern rebels and southern separatists say they are denied resources and a say in politics.

As oil and water resources dry up, the 68-year-old Saleh is less able to pay off allies to keep the peace.

A leading hardline Muslim cleric, Sheikh Abdul-Majid al-Zindani, who two weeks ago backed the idea of Saleh staying in power until his term ends in 2013, joined protesters on the streets of Sanaa.

“There is no legitimacy to a ruler whose people do not want him,” Zindani said.

Saleh himself lashed out at U.S. President Barack Obama over demands that leaders show restraint in tackling unrest as protests, galvanised by successful uprisings in Egypt and Tunisia, rage across Libya, Yemen, Bahrain and Oman.

“Every day we hear a statement from Obama saying ‘Egypt you can’t do this, Tunisia don’t do that’,” Saleh said in a speech at Sanaa University, a rallying point for protests in the capital where tens of thousands have gathered outside campus.

In Aden, protesters covered their tents with black flags and pictures of people killed in clashes with police.

In Hodeidah province in the north, Saleh loyalists and protesters fought with rocks and sticks. Four people were hurt.

Security forces in the south have come under frequent attack in recent days. On Tuesday, separatists fought the army in southern Habilayn, killing two soldiers and wounding three.

Also in the south, tribesmen kidnapped an Uzbek doctor, saying they would use him as leverage for demands that the government hold accountable those behind an airstrike aimed at al Qaeda that killed dozens of civilians in December 2009.

Top Photo: Anti-government protesters are reflected on the sunglasses of a fellow protester during a demonstration demanding the ouster of Yemen’s President Ali Abdullah Saleh outside Sanaa University February 28, 2011. Reuters