King Abdullah under pressure from tribes in Jordan 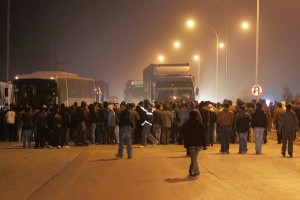 Faris Fayez grew up hearing about the day in 1970 when his father and other Jordanian tribal leaders summoned the late King Hussein to complain about entrenched Palestinian fighters who were virtually occupying the country.

“King Hussein was two hours late. When he finally arrived, my father stood up — and he used to call the king by his first name — ‘Hussein,’ he said, ‘We feel now that for you we are the cover that the shepherd uses. When you get cold, you cover up with us. When you don’t need us, you kick the cover with your feet.'”

The king apologized for being late. He said he didn’t know the tribal elders were waiting. He valued their advice. Even better, from their point of view, he unleashed the army against the militants. “A quality man, with a humane view of people,” Fayez said.

Over mint tea at his desert home, he turned the conversation to the current king.

“King Abdullah, the situation is not the same as it was with his father. There’s negligence in the state. He lets things go. It’s like the shepherd that leaves his sheep to go astray. And for this reason, corruption has spread everywhere.”

Last week, Fayez’s Bani Sakher tribe showed its displeasure by lining up across the highway between the capital, Amman, and Queen Alia International Airport, blocking the road in protest of the government’s use of increasingly valuable traditional tribal lands for development.

Although most analysts think there is little chance of a popular storm like the one that swept Egypt in this quiet kingdom of luxury hotels, impoverished mud hut villages and exotic desert castles, King Abdullah II is facing criticism from a quarter that couldn’t be more troubling: some of the tribesmen and military veterans who have been the bedrock of the Hashemite dynasty and are unnerved by the country’s large and growing population of Palestinians.

Tribal leaders such as Fayez’s father have never hesitated to confront the king privately, but the 49-year-old monarch has faced rare, open criticism in recent months. Since the Egyptian uprising, dissent from leftists and Islamist and labor leaders has escalated into almost-daily street protests and a public letter from 36 tribe members demanding an end to corruption and the king’s near-unilateral hold on political power.

The king has responded by pledging to rewrite the election laws and expand freedoms. He fired the Cabinet and replaced the prime minister with a former military officer and tribesman.

“I want real and quick reform,” the king said in a speech Sunday, in which he pledged to investigate corruption, speed up review of the election law and hasten economic progress. “I want quick results. When I talk about political reform, I want real reform consistent with the spirit of the age.”

But Jordanians, emboldened by what happened in Egypt, appear to expect much more.

After pro-government activists attacked demonstrators with sticks and batons at a march last week, reformists pledged a major move into the streets Friday in response. Their key demands are fair elections and a return to the 1952 constitution as it existed before most power was transferred to the monarchy.

The Muslim Brotherhood, the only real organized opposition in Jordan, boycotted the parliamentary vote last year as a protest against what it said were fraudulent elections in 2007, in which the organization against all reasonable expectations netted only six seats out of 110. Brotherhood leaders, along with other reform advocates, are insisting on a prime minister who is selected by parliament, perhaps in consultation with the king.

“What happened in Tunisia and especially Egypt has brought a big hope — Egypt was the most secure and autocratic regime, and it fell,” said Murad Adaileh, a member of the Muslim Brotherhood’s executive committee. “People’s frustration is increasing because we have started to see a total alliance between the authority of the state and money, which has led to an unprecedented state of corruption.”

Privatization efforts have led to complaints that the country was getting raw deals for selling off its golden geese. A businessman with purported close connections to the royal palace landed a lucrative cellphone license for a fraction of what other companies were offering, according to widespread complaints in the local media. Critics said phosphate and potash companies sold to foreign companies quickly showed profits greater than the amount for which they were sold.

“In one year, one profited three times the sales price. This is not just corruption, it is audacious corruption,” said retired Gen. Ali Habashneh, who was one of a number of senior military veterans who signed a public letter last year demanding reforms.

Much of the public blame seems to focus less on King Abdullah than on his queen, Rania. The beautiful Kuwaiti-born Palestinian’s vacations in St. Tropez in the company of rock star Bono and model Naomi Campbell have not sat well among Jordanians who are reeling under rising food and fuel prices in a capital city that has the highest cost of living in the Arab world.

Public irritation came to a boiling point in September, when the queen hosted an opulent party for her 40th birthday in the scenic desert valley of Wadi Rum. Though some villages in southern Jordan can barely pay for electricity, the party reportedly featured a large number “40” in lights.

The event raised $1.6 million for charity and wasn’t that glitzy, said Ayman Safadi, who was deputy prime minister in the government that was sacked this month.

“Any middle-class Jordanian would have thrown a better party,” he said. “And the food? I came back and had to order a hamburger because I was still hungry.”