Shiite leader calls for end of monarchy in Bahrain 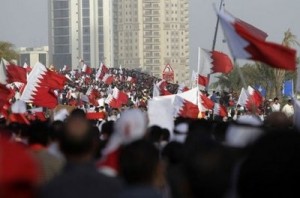 Tens of thousands of opposition protesters have taken to the streets of Bahrain in spite of the government’s efforts to meet some of the demands of anti-government activists.

Some demonstrators waved the Bahraini flag and chanted anti-government slogans as they marched in Manama Tuesday. Some protesters had slept in the capital’s Pearl Square, which has become a focal point in demonstrations. Anti-government activists have staged more than a week of protests, but Tuesday’s demonstration is believed to be the first one called for by the country’s opposition parties.

The protest took place in spite of King Hamad bin Isa al-Khalifa’s order for some political prisoners to be released, a move that gave a boost to opposition demands for democratic reforms.

Tensions rose after a hard-line Shiite leader called for the end of Bahrain’s monarchy.

A key hard-line Shiite leader called for an end to Bahrain’s monarchy on Monday and another made plans to fly back to the country on Tuesday, escalating tension and threatening to open fissures in the opposition as protests stretch into a second week.

In an interview at his home in Nuwaidrat, a village south of Manama, Abdulwahab Hussain said that he and the officially illegal Wafa movement that he founded would not accept any deal short of the king’s departure.

“The people are now asking the regime to step down,” he said. After the violence of the past week, “the regime doesn’t have the legitimacy to be ruling the people.”

Analysts and moderate political leaders said that those calls could further radicalize the opposition and that the situation could grow even more tense with the planned return Tuesday of the secretary general of Haq, the other large hard-line Shiite opposition movement. Hassan Mushaima was a leader in a major Shiite uprising in Bahrain in 1994 and has been living in London since last year after seeking medical treatment.

An exiled Shi’ite activist has said he will return to the country from London on Tuesday. The return of Haq movement leader Hassan Mashaima could give a boost to opposition demands for reforms and the ouster of the ruling Sunni dynasty.

Bahraini media did not name the prisoners to be freed but said the release includes some of the Shi’ite activists on trial for allegedly plotting to overthrow the government. It is not clear if the announcement means charges will be dropped against Mashaima, who was being tried in absentia.

On Monday, thousands of government supporters gathered at a Manama mosque Monday, waving Bahraini flags and pledging allegiance to the nation’s Sunni rulers.

In a blow to Bahrain’s economy, Crown Prince Salman bin Hamad al-Khalifa said Sunday the government has canceled the season-opening Formula One Grand Prix due to the political unrest. The race had been scheduled for March 13.

King Hamad has named the crown prince to lead a dialogue with the opposition, but opposition parties and protesters have yet to accept the proposal. They are demanding the resignation of the government and democratic reforms to strip the Sunni monarchy of its powers and end what they say is long-running discrimination against majority Shi’ites.