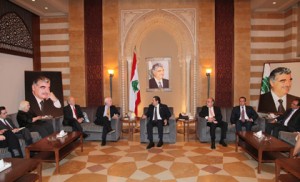 Outgoing Prime Minister Saad Hariri received U.S. Senators John McCain and Joseph Lieberman, in the presence of U.S. Ambassador to Lebanon Maura Connelly, and Hariri’s political advisors Mohammad Shatah and Hani Hammoud. The discussion focused on the situation in Lebanon and the region and bilateral relations.

Hariri hosted a dinner in honor of McCain and Lieberman, and the accompanying delegation.

“Our roots are Lebanon and the Arab cause, and the Special Tribunal for Lebanon is a just cause to unmask the criminals who assassinated Prime Minister Rafic Hariri and all the other martyrs,” Hariri said yesterday.

Hariri, who spoke to the delegations of sectors lawyers and engineers in the Future Movement, stressed the importance of mass participation in the forthcoming celebration of March 14.