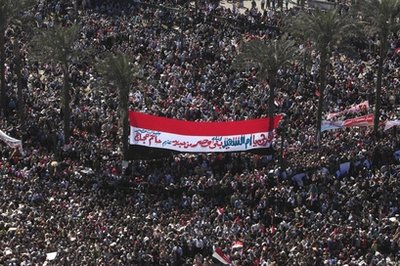 Joseph Schumpeter one of the greatest minds in economics coined the term “creative destruction” in an effort to describe how capitalism moves forward by encouraging innovation and creativity. I believe , rather strongly that this idea applies rather neatly to the field of political science in general and to what is taking place in the Middle East in particular. What appeared to be hooliganism to Mr. Mubarak and his entourage and what is described as mobs and criminals by Saif Al Islam are anything but. This apparent spontaneous chaos is in effect nothing but the most creative of destructions that could give birth to a new free and democratic MENA.

Two down and seven to go might soon become three down and six to go. Wouldn’t it be grand if the move towards democracy, diversity and freedom is to finally take root in the Arab world?

Many of us have been calling for an “Arab awakening” a Gdansk moment or an Arab Berlin wall for a while. But if the revolution is to uproot the ruling structures in each of the Arab countries then why do we count only 9 dictators instead of 21? Well, in my case, at least, I think a radical change in the big 9 will force the others in the Gulf including Iraq and Lebanon to change also. The smaller countries are more dependent on their surroundings and none of them is strong enough to impose its beliefs but each of them will not be able to resist the tide to change and reform once that becomes the dominant form in the region.

Yet in spite of all of this I have been struggling to explain the difference between what is going on in Egypt, Tunisia, Libya, Yemen and the lack of any change in Lebanon. After a lot of soul searching I believe that to a large extent one can explain the respective differences between any of the major players and Lebanon in terms of another economic principle. In a major country such as Egypt or possibly Libya the power is concentrated in one person at the top of the pyramid. That single person embodies all powers in the country. This concentration of power is akin to that of a pure monopolist who is free to exploit and abuse the consumers/citizens. Lebanon on the other hand is closer to what Galbraith called the “counter vailing power” structure. This would be the fact when a pure monopolist in one field is not free to exploit, restrict and abuse since this monopolist faces an equally powerful monopolist on the other side of the enterprise. The interaction between these two monopolists will result in a solution somewhere in between what each of them would have liked to do. Theoretically the solution could be a total negation of the power of each and thus the citizen/consumer will contend with a solution that could be rather beneficial. A good example of this would be say an automotive giant who would have liked to impose its will on tire manufacturers but if the automotive giant faces a rubber giant then none of them would be in a position to exploit the other and the consumer will benefit.

Michael Young, of the Daily Star, has dealt with the issue of relative personal freedom in the Lebanese public square by attributing that relative freedom to the inability of any of the major sects to impose its own will unhindered. That is exactly what a counterveiling power does. This however does not make sectarianism acceptable.

But this above argument, although it does lead to good outcomes, is just as badly in need of reform as any of the other single power dictatorships for the simple reason that the solution of the interaction between the oligopolists can never be determined in advance and if it does turn out to be efficient then that would be purely accidental. The system cannot guarantee efficiency/freedom and so the need to change and the need to adopt a fairer more competitive system are just as acute as in the case of a pure monopolist/dicatorship. As a result the revolutionary task in Lebanon is even more difficult than it was for the Tunisians and the Egyptians who had to organize against the person on top of the pyramid in an effort to uproot the regime that he represents. In Lebanon, we do not have that luxury, we have to organize against and get rid of the people at the top of a number of smaller pyramids whose individual constituents regard only the opposing pyramids as corrupt and inefficient. Each constituency appears to be relatively satisfied with its own mini pyramid and concentrates on blaming the opposing power structures. This problem fits very well the line from Luke:

“How can you say to your brother, ‘Brother, let me take the speck out of your eye,’ when you yourself fail to see the plank in your own eye? You hypocrite”. Is there any hope for a radical revolutionary reform in Lebanon? Only if we can shed our religious tribal affiliations and act as one. Unfortunately for us in Lebanon, Mouwatinieah and secularism are alien ideas.