Syrians protest in Lebanon, call for re-occupation by Syria [Photos] 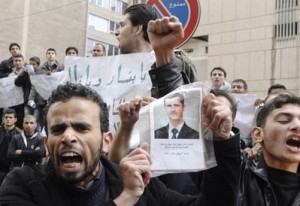 Around 60 people gathered in front of the Syrian Embassy in Beirut, chanting the slogans: “we want to return to our country,” and, “with soul and blood, we sacrifice ourselves for you.”

The Lebanese army has cut off parts of Makdessi Street in Hamra leading up to the embassy.

NOW Lebanon’s Patrick Gallagher said that despite the demonstration, the embassy appears to be open and running as usual with additional guards in front of the building. The Lebanese army and police are not allowing pictures to be taken unless individuals show their press credentials.

The crowd is jeering and whistling, even erupting in laughter occasionally between chants.