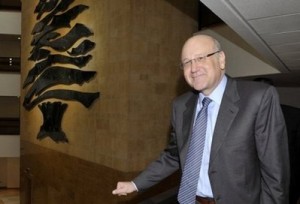 Lebanon’s PM-designate Najib Miqati’s nephew is reportedly in Washington in an attempt to garner the support of the Obama administration for the billionaire businessman’s future government.

The officials told the young businessman that Washington is awaiting deeds not words in order to announce its support for the Miqati government.

Other sources told the newspaper that Azmi Miqati had asked for meetings with high-ranking U.S. officials, but the reply came with the arrangement of talks with lower-ranking Obama administration figures.

Al-Hayat said the envoy stressed to the officials Lebanon’s commitment to all international resolutions.

However, according to An Nahar newspaper, foreign decision-makers have warned a Miqati envoy that a Hizbullah-led government would have “dangerous repercussions on the future of the country.”

“Such a cabinet wouldn’t only have Hizbullah members in it, but would consider Lebanon’s international commitments as illegitimate,” the decision-makers reportedly said.

Azmi is the son of Taha Mikati, Investcom LLC’s chairman and founder, and Najib’s brother. As a corporate entity Investcom was founded in 1984. Azmi Mikati is the current CEO, responsible for the global strategy of the holding and its implementation. While in college, he founded T-One, a telecom company providing long-distance services between the United States and other international destinations. Investcom is the holding company under which many other telecom companies controlled by the Mikatis are found. Investcom is 70.6 percent owned by the Mikatis. Investcom owns and operates GSM networks, ostensibly under the Areeba brand in Benin, Cyprus, Ghana, Guinea Bissau, Liberia, Sudan, Syria and Yemen, and recently won licences in Afghanistan and the Guinea Republic.