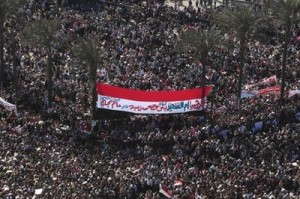 Egyptians held a nationwide “Victory March” on Friday to celebrate the overthrow of Hosni Mubarak’s 30-year rule one week ago, to protect the revolution and to remind new military rulers of the power of the street.

Below are comments from those involved:

“This is a serious message to the military. After today, it will be more than obvious to them that if they don’t protect the revolution and respond to the people’s demands, the next time people go down to Tahrir won’t be to celebrate victory, but they will bring their blankets with them like before.”

“Look at these numbers! The army is trying to hold the stick from the middle (an Arabic expression meaning ‘have it both ways’), they might be letting us celebrate but it’s because they know they should be scared of us.”

CHANT IN TAHRIR SQUARE, THE EPICENTRE OF THE REVOLT

“The army and people are united.”

GRAFITI ON THE ‘MUGAMMA’ ADMINISTRATIVE BUILDING IN TAHRIR

“We are a Facebook group ‘let’s rebuild Egypt’ and this is an artistic expression of nationalism and goodwill.”

“Power of the revolution. I love my country.”

“We urge all noble people in the nation and lovers of the nation, Christians and Muslims, men, women and youth, and those whose hearts beat with the love of Egypt, to guard the revolution and its legitimate demands, and not to leave the chance for opportunists to kidnap it and its accomplishments which, with God’s permission, have begun to bear fruit. This is an Egypt that cannot be deceived,” he wrote on the Brotherhood website.

“The founders’ goal is to move Tahrir Square with all its diversity and political resolve to the party … We oppose one-man leadership and stress that leaders must be youth.”

“Tomorrow (Friday) in Tahrir, we will press for firm steps against the abuses of the police and the interior ministry, we will call for the release of political prisoners.”Egyptians held a nationwide “Victory March” on Friday to celebrate the overthrow of Hosni Mubarak’s 30-year rule one week ago, to protect the revolution and to remind new military rulers of the power of the street.

BASSEL EL TOUKHY, ORGANISER OF MARCH TO DRAW TOURISTS BACK

“We thought of organizing an event to invite tourists back to Egypt to tell them it’s a new Egypt and that they should come back to visit … We want tourists to come back because we are rebuilding the country.”

“Tomorrow will be a million people march to protect the revolution and its demands.”

“We will welcome everyone to the new Egypt. A new country that started in Tahrir square. A country of unity, peace, freedom and justice for all.”