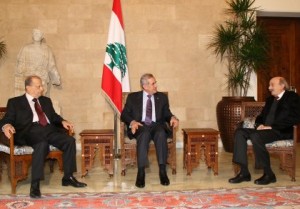 Lebanese President Michel Suleiman is insisting that the Interior Ministry should be part of his ministerial share, LBC television reported on Friday.

The report also said that Prime Minister-designate Najib Mikati is waiting for Free Patriotic Movement leader MP Michel Aoun’s response to some of his suggestions.

Mikati is also waiting for the March 14 coalition’s final response on whether it will participate in the next cabinet, the report added.

Aoun is reportedly demanding certain ministerial portfolios – in particular the Interior Ministry – while other March 8 parties reportedly oppose this demand.

Aoun said in an interview on OTV on Wednesday that his parliamentary Change and reform bloc represents 40 % of the new majority and for this reason he wants 13 cabinet portfolios out of the proposed 30 in the new cabinet .

Aoun said he won’t let the president have any portfolio.

Similarly MP Nabil Nicolas, a member of Aoun’s Free Patriotic Movement told New TV on Friday: “Why would the president be given a share in the cabinet if there is a single team in the government?” . Nicolas in his statement is confirming that only the Hezbollah-led March 8 alliance will form the cabinet , even though Mikati is still talking to March 14 leaders to convince them to join.

According to observers Hezbollah is the one that wants the ministry of interior because it is the ministry that is in charge of internal security in the country, but is hiding behind Aoun in its demand , knowing it has him under complete control.

The dispute between Aoun and Suleiman prompted the head of the Lebanese Democratic Party MP Talal Arslan to announce during a press conference on February 13 :”I repeat my nomination of Progressive Socialist Party ( PSP) leader MP Walid Jumblat to personally assume the position of interior minister.