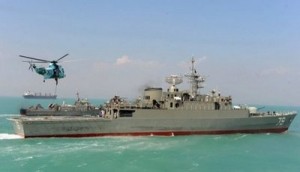 Two Iranian warships planned to sail through the Suez canal en route to Syria on Wednesday, Israel said, calling it a “provocation” by the Islamic Republic.

The Iranian naval contingent described by Foreign Minister Avigdor Lieberman would pose no significant military threat to Israel but could spell the closest-ever encounter by the forces of the two old foes, who are geographically distant.

Syria is one of Israel’s neighbouring enemies, whose alliance with Tehran has grown in parallel to increased international censure of the Iranian nuclear programme. “Tonight, two Iranian warships are meant to pass through the Suez Canal to the Mediterranean Sea and reach Syria, something that has not happened in many years,” Lieberman said in a closed-door speech to Jewish leaders, a transcript of which was issued by his office.

Iran’s semi-official Fars news agency had reported on Jan. 26 that Iranian navy cadets had been dispatched on a year-long training mission going via the Gulf of Aden into the Red Sea and on through the Suez Canal to the Mediterranean Sea.

“During the mission the Iranian Navy cadets are due to be trained and prepared for defending the country’s cargo ships and oil tankers against the continued threat of attack by Somali pirates,” the Fars report said.

Israel’s Yedioth Ahronoth newspaper described the Iranian ships as a MK-5 frigate and a supply vessel.

According to the daily, no Iranian naval vessels have passed through Suez since the Islamic Republic was established in 1979, causing a bitter rift between Tehran and Cairo.

Israel is concerned by Iranian plans to deploy warships in the Mediterranean Sea, Red Sea and the Gulf of Aden, security officials told the newspaper.

The ships now on their way would “dock at a Syrian port for a year”, said a Israeli senior official, who added that there was no justification for Iran to deploy warships in the Mediterranean.

Iranian ships in the Mediterranean would be in the vicinity of arch-enemy Israel and of Lebanon, to Israel’s north and home of the pro-Iranian Hezbollah movement, and Syria.

The Suez Canal is a vital commercial and strategic waterway between Europe and the Middle East and Asia.

“The Suez Canal does not deny any commercial ships from passing as long as we are not in a state of war,” Ahmed El Manakhly, a member of the Suez Canal board, said.

Manakhly said the canal had not received notice so far from either the ministries of defence or foreign affairs on any Iranian naval ship passage, but that approval was often given just hours ahead of the passage.

“In this case as long as they (Iranians) are not conducting some sort belligerent operation I think they would have a right to go through the canal like any other country; they are conducting counter piracy operations in that area,” said Commander James Kraska, professor of international law at the U.S. Naval War College.