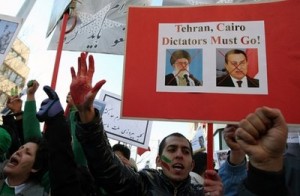 Energized by people power revolts in Tunisia and Egypt, the opposition in Iran took to the streets on Monday, breaking a spell of fear and intimidation for the first time in more than a year.

Security forces fired tear gas, paintball guns, and bullets into the air, to disperse crowds as tens of thousands of protesting Iranians defied rally bans in Tehran and major cities to voice their solidarity with Arab revolts and anger at Iran’s hard-line leaders.

Officials had declared the opposition Green Movement a “corpse,” while taking every measure to preempt a rekindling of past protests – and lethal street battles – that lasted for weeks after disputed June 2009 elections.

The irony wasn’t lost on Iran’s latent opposition in recent days, as Iran’s top leaders claimed to be at the forefront of a popular “Islamic awakening” that was sweeping across the Arab world – but would not allow it to touch Iran.

“The government tried to say this movement is dead, it’s a corpse,” says an observer in Tehran who could not be named. “But for a corpse, you don’t organize maximum security forces all over Tehran. This is the most important point today…. Do [hard-liners] doubt finally? Or still hold the illusion that it’s just a few hundred crazy people out there?”

“It’s not that the number is huge by any standards,” adds the observer. “It’s huge because there was so much repression during the last year, so these people risking and coming out was beyond expectation.”

The fact that there was any turnout at all, after the systematic measures taken against the Green Movement and its leaders since mid-2009 – among them executions, rape in detention, and stiff prison sentences – served to invigorate its foot soldiers.

People will definitely believe in themselves again,” says a London-based Iranian analyst who closely monitored events on Monday. “The [Green] Movement showed it still has strength…. It has, at least in people’s hearts and minds, [been given] great boost of morale and knowing the movement is still there.”

The scenes on the streets on Monday resembled those of the protests of 2009 against the declared reelection of President Mahmoud Ahmadinejad. Scores, if not hundreds, died and thousands were arrested then. More than 100 were charged with fomenting a “velvet revolution” in a show trial.

‘Death to the dictator’

One poster made for the event showed comparison pictures of Mr. Mubarak and President Ahmadinejad striking the same arms-raised-in-victory pose. That was a note struck by US Secretary of State Hillary Clinton, who called for the Iranian government to recognize the “aspirations” of its people, as it had for Egyptians.

“What we see happening in Iran today is a testament to the courage of the Iranian people and an indictment of the hypocrisy of the Iranian regime, a regime which over the last three weeks has constantly hailed what went on in Egypt,” Mrs. Clinton said. “And now, when given the opportunity to afford their people the same rights as they called for on behalf of the Egyptian people, [they] once again illustrate their true nature.”

State television dismissed the protesters as “hypocrites, monarchists, thugs, and seditionists who wanted to create public disorder in Iran [and] were arrested by our brave nation…. These people set garbage bins on fire and damaged public property.”

In one violent episode caught on video, a basiji religious militiaman tried to stop a crowd desecrating a banner with a portrait of Ayatollah Khamenei and the founder of Iran’s 1979 Islamic Revolution, Ayatollah Ruhollah Khomeini. The basiji was viciously kicked and beaten as an agent of the regime.

“We see that sometimes, when the leaders and heads of countries do not pay attention to the nations’ demands, the people themselves take action to achieve their demands,” Gul said on Monday during a joint news conference with Ahmadinejad.

Green Movement protests peaked in December 2009, but huge rallies planned for February 2010 were preempted by arrests and saturation deployment of security forces and intelligence agents.

Since then opposition leaders – former presidential candidates Mir Hossein Mousavi and Mehdi Karroubi, both of them senior former officials – have been under virtual house arrest and vilified by hard-line officials as traitors.

Before his phone lines were cut off, his house surrounded, and guards placed to prevent visits from anyone, including his children – and to prevent him from attending Monday’s demonstration –Mr. Karroubi told The New York Times in a Skype interview last week that the event was a test for the Iranian regime.

“If they are not going to allow their own people to protest, it goes against everything they are saying, and all they are doing to welcome the protests in Egypt is fake,” said Karroubi.

Prior to Monday’s protest, dozens of journalists and activists were detained, though protest routes had already been mapped out in 30 cities and circulated on the Internet.

On Monday, security forces in riot gear – and in some places, according to eyewitnesses, wearing face masks for the first time – deployed in major squares and patrolled the streets in motorcycle posses.

The security forces have “also learned,” since 2009, says the London analyst. “They are showing crowd management now, less thug-like and more trained. Still brutal, but dispersing people before a nucleus is formed, funneling [crowds] to keep [people] moving.”

Still, he says, the images of Iran’s most sacred leadership icons being driven over by cars – even more than video of burning trash bins and clashes – are the ones that will resonate at the top in Iran.