Tens of thousands protest in Tehran in pictures 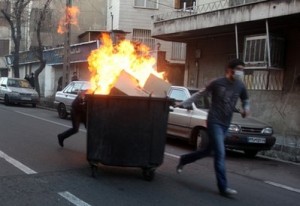 Tens of thousands of demonstrators took to the streets of Iran today, hoping to emulate the popular uprising in Egypt in a bold move which prompted a violent crackdown by security services.

The streets were flooded with police and militia as the hardline regime of President Mahmoud Ahmadinejad sought to prevent marches in support of Egypt’s pro-democracy movement becoming demonstrations against the government.

Riot police beat protesters and used tear gas to disperse the crowds in central Tehran, while officers on motorbikes fanned out to prevent further demonstration

Amid widespread condemnation of police tactics by human rights groups and western politicians, the Iranian opposition claimed dozens of people had been arrested.

Eyewitnesses said at least three protesters had been injured by bullets and taken to hospital in central Tehran, with dozens of others hospitalised because of severe wounds from being beaten.

Despite the intimidation, the crowd chanted ‘an Iranian dies but doesn’t accept humiliation,’ and ‘death to the dictator’.

The semi-official Fars news agency called protesters ‘hypocrites, monarchists, ruffians and seditionists,’ and ridiculed them for not chanting any slogans about Egypt as they had originally promised.

Fars, which is linked to the Revolutionary Guard, Iran’s most powerful military force, said a number of protesters were arrested and handed over to police and security officials.

Opposition leader Mirhossein Mousavi’s website kaleme.com reported that similar rallies took place in the central city of Isfahan and Shiraz in the south, with security services also using force to disperse them.

Following the announcements by the opposition that they would attempt to hold a new rally in solidarity with the Egypt uprising, Iran’s security forces cut telephone lines and blockaded Mousavi’s home to stop him attending the planned rally.

Amnesty International criticised Iranian authorities for breaking up the banned rally, saying the crackdown was aimed at blocking the work of activists and stifling dissent.

‘Iranians have a right to gather to peacefully express their support for the people of Egypt and Tunisia,’ said Hassiba Hadj-Sahraoui, Amnesty International’s Middle East and North Africa deputy director.

‘While the authorities have a responsibility to maintain public order, this should be no excuse to ban and disperse protests by those who choose to exercise that right.’

‘President Ahmadinejad last Friday told the Egyptian people that they had the right to express their own views about their country,’ he said in a statement.

‘I call on the Iranian authorities to allow their own people the same right and to ensure that the security authorities exercise restraint.’

And, for the White House, U.S. Secretary of State Hillary Rodham Clinton expressed support for the tens of thousands of protesters in Iran’s capital, saying they ‘deserve to have the same rights that they saw being played out in Egypt and are part of their own birthright.’

She said she and others in Barack Obama’s administration ‘very clearly and directly support the aspirations of the people who are in the streets’ of Tehran.

She spoke of the ‘hypocrisy’ of the Iranian government that hailed the protests in Egypt but has tried to suppress opposition at home.

She said there ‘needs to be a commitment to open up the political system, to hear the voices of the opposition and civil society.’

Since the beginning of the year, a wave of protests has reordered the political map of the Middle East. The Jasmine Revolutio in Tunisia pushed President Zine El Abidine Ben Ali into exile on January 14, while the dramatic fall of Egypt’s President Hosni Mubarak after popular protest ended almost 30 years of rule.

Many in the Arab world are wondering ‘where next?’, as protest in Algeria brought thousands on to the streets, and Bahrain was reduced to offering cash handouts to persuade protesters against demonstrating.

The security clampdown in Iran is reminiscent of the backlash that crushed a wave of massive protests after Ahmadinejad’s disputed re-election in June 2009.

But opposition supporters revived a tactic from the unrest, shouting ‘Allahu Akbar,’ or God is Great, from rooftops and balconies into the early hours in a sign of defiance toward Iran’s leadership.

Mousavi and fellow opposition leader Mahdi Karroubi have been under house arrest since last week after they asked the government for permission to hold a rally today in support of the uprisings in Egypt and Tunisia.

On Sunday, the opposition renewed its call to supporters to rally, and accused the government of hypocrisy by voicing support for the Egyptian and Tunisian uprisings while refusing to allow Iranian political activists to stage a peaceful demonstration.

The uprising in Egypt, which toppled President Hosni Mubarak, opened a rare chance for Iran’s opposition.

Ahmadinejad claimed the Egyptians took inspiration from Iran’s 1979 Islamic Revolution, which brought down a Western-backed monarchy.

Iran’s opposition movement used the comments to push the government into a corner and request permission to march in support of Egypt’s protesters.

Iranian officials quickly backpedalled and said no pro-Egypt rallies were allowed – bringing sharp criticism from the White House and others.

Karroubi and Mousavi have compared the unrest in Egypt and, before that, Tunisia with their own post-election protest movement – although State TV said they were carrying out a plot designed by Iran’s enemies.

Hundreds of thousands of Iranians peacefully took to the streets in support of Mousavi after the June 2009 vote, claiming Ahmadinejad was re-elected through massive vote fraud.

A heavy government crackdown suppressed the protests. The opposition has not been able to hold a major protest since December 2009.

The opposition says more than 80 demonstrators were killed in the turmoil.

The government, which puts the number of confirmed deaths at 30, accuses opposition leaders of being ‘stooges of the West’ and of seeking to topple the ruling system through street protests.

Turkish President Abdullah Gul, who is on a visit to Iran, urged governments in the Middle East to listen to the demands of their people.

‘When leaders and heads of countries do not pay attention to the demands of their nations, the people themselves take action to achieve their demands,’ IRNA quoted Gul as saying today.

Foreign media are banned from covering street protests in Iran.