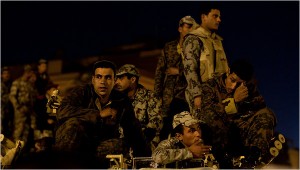 Then came Thursday, a roller coaster of a day on which the military at first appeared to be moving to usher Mr. Mubarak from the scene — and then watched with the world as Mr. Mubarak clung to his title, delegating some powers to Omar Suleiman, the vice president and former longtime intelligence chief.

The apparent standoff between the protest leaders and Mr. Mubarak, hours before major demonstrations scheduled for Friday, could pose a new dilemma for military commanders. Mr. Suleiman called for an end to demonstrations, and Human Rights Watch said this week that some military units had been involved in detaining and abusing protesters. But by most accounts, army units deployed in Cairo and other cities have shown little appetite for using force to clear the streets.

Early Friday, Mohamed Elbaradei, the former head of the International Atomic Energy Agency and now an opposition leader, sent a message on Twitter, declaring: “Egypt will explode. Army must save the country now.”

After watching Thursday’s events, Andrew McGregor of the Jamestown Foundation, author of “A Military History of Modern Egypt,” said that the military was caught between Mr. Mubarak and the protesters, and that it was hard to predict how officers might react. “For the first time, I think there’s the possibility of a split in the military,” he said.

The protesters’ hopes soared Thursday afternoon, when the chief of staff of the armed forces, Gen. Sami Hafez Enan, visited them in Tahrir Square in Cairo and suggested that their demands would soon be met. He also presided along with the defense minister, Field Marshal Mohamed Hussein Tantawi, over a meeting of the Supreme Council of the Armed Forces. Paul J. Sullivan, an expert on the Egyptian military at the National Defense University, said it was only the third time in Egypt’s history that the council had met; the other occasions came during wars with Israel in 1967 and 1973.

Neither Mr. Mubarak nor Mr. Suleiman were at the meeting, and the resulting communiqué declared that the council had met “in affirmation of support for the legitimate demands of the people.” So it came as a shock when Mr. Mubarak said he was not stepping down.

The military has been an anchor of Egypt’s authoritarian government for nearly 60 years. It helped usher Mr. Mubarak, a former air force chief, into office after the assassination of Anwar el-Sadat in 1979. But under Mr. Mubarak’s three-decade rule, its role in Egyptian politics has been reduced, with the separate domestic security services playing the role of political enforcer. Many top military officers have kept busy overseeing the military industries that represent an estimated 5 to 15 percent of the economy.

Assuming military leaders went along with it, the decision to leave Mr. Suleiman in place suggests that no irreversible commitment to move toward democracy had occurred. Even in recent days, Mr. Suleiman has suggested that the country is not ready for democracy and that the emergency rule in place for decades should not be ended yet, a point Mr. Mubarak echoed in his speech. At 74, Mr. Suleiman has been one of Mr. Mubarak’s closest aides for nearly two decades, serving as chief of military intelligence and then the nation’s intelligence director until he was named vice president on Jan. 28.

His relationship with General Enan is unclear. At 63, General Enan is a generation younger than Mr. Mubarak. He has spent extended periods in the United States and is closer to American commanders than the oldest Egyptian military leaders, including Mr. Tantawi, the 75-year-old defense minister and commander in chief, who were trained by the Soviet Union.

American officials said General Enan had offered them assurances that the armed forces would defend Egyptian institutions, not individuals, and would not open fire on civilians. Defense Secretary Robert M. Gates has commended the Egyptian military for what he called “exemplary” conduct amid the street protests and said it had “made a contribution to the evolution of democracy.”

In addition to its role as the ultimate source of political power, the military has a huge role in the Egyptian economy. Since a peace treaty was signed with Israel in 1979, military industries have expanded in part to keep a relatively idle officer corps content.

“Part of the strategy was to buy their acquiescence through a greater economic role for them,” said Michael Wahid Hanna, an analyst with the Century Foundation who has been in Cairo during the crisis. “Their business interests are vast,” he said, and include such benefits as officers clubs and a boat on the Nile for the air force.

After the protests began Jan. 25, the military asserted itself in domestic politics for the first time in years, deploying on the streets of Cairo and other cities. The initial reshuffling of Mr. Mubarak’s government, though perceived abroad as a concession to the demonstrators, tightened the grip of the military and intelligence old guard.

First came the advance of Mr. Suleiman, whose appointment to the vice presidency has all but ruled out the succession of Gamal Mubarak, 47, the president’s son and a well-connected businessman, removing a challenge to the military’s economic and political dominance. Gamal Mubarak has no military background, but he was widely discussed as a possible successor to his father, to the distress of military and security officials.

In the personnel changes Mr. Mubarak announced days into the protests, the prime minister, Ahmed Nazif, an engineer, was replaced by the former commander of the air force, Ahmed Shafik. The defense minister, Mr. Tantawi, was given the additional title of deputy prime minister while remaining commander in chief of the armed forces.

“This is a security cabinet put in place by Mubarak,” said Michele Dunne, an expert on Egypt at the Carnegie Endowment for International Peace. “He fired all the economic reform people and brought in others who are security minded.”

Now the military finds itself in an unfamiliar role, caught between swelling protests and civilian leaders who appear reluctant to cede real power.

Mr. Hanna, of the Century Foundation, said the military had no training in policing the streets in the face of angry civilians. “It is an open question,” he said, “whether the chain of command would be respected in a situation when it tasked a foot soldier or even a commander to kill their own people.”

Paul J. Sullivan, an expert on the Egyptian military at the National Defense University, said he had “never been more worried about Egypt and the region than now.”

He said: “When you have hopes that are dashed , that’s the most dangerous moment. All bets are off.” NYT