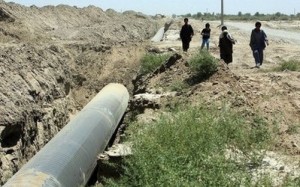 An aging oil pipeline has ruptured in southern Iran, contaminating vast patches of the coast and farmland near the town of Deylam on the Gulf, the official IRNA news agency reported on Monday.

“Over 20 kilometres (12 miles) of Deylam coast and 500 hectares (1,200 acres) of farmland have been contaminated by the oil spill,” said Behrouz Atabakzadeh, the environmental protection chief in Bushehr province.

Atabakzadeh said the breakage in the pipeline between Aghajari and Deylam had happened last week, and described the damage caused by the oil spill as “irreversible.”

Mohammad Baqer Nabavi, a deputy head of the Environmental Protection Organisation, said an operation to clean up the coast was under way but admitted that it could take at least two months to be completed.

“If weather conditions are favourable, it will take at least two months to clean up the contaminated areas,” Nabavi was quoted by ISNA news agency as saying.

A storm has hampered the operation, a senior environmental official told Mehr news agency. “All equipment is ready to clean up the spill but the work is being slowed down by the storm,” Omid Sadighi said.

Iran is the second largest crude producer in the Organisation of Petroleum Exporting Countries (OPEC). AFP