Musa: We need a transitional period, a road map, to change the regime in Egypt

by yalibnan
456
In an interview with Asharq Al-Awsat, Arab league chief said: We need a transitional period, a road map, and a political and legal dialogue to change the regime in Egypt.
Share: 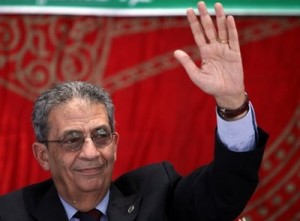 Arab League Secretary General Amr Musa has warned against exposing Egypt to greater dangers if confidence is lost in the reforms proposed about drafting a new Egyptian system and law.

In an interview with Asharq Al-Awsat, Musa says: We need a transitional period, a road map, and a political and legal dialogue to change the regime in Egypt.

The following is the text of the interview:

[Asharq Al-Awsat] President Mubarak in his latest address talks about amending Articles 76 and 77 of the Constitution. This amendment will give the opportunity to every Egyptian citizen to be a candidate for the post of president. Will you become a candidate, especially after Mubarak announced that he is not going to be a candidate?

[Musa] First, the announcement by the president that he will not be a candidate opens the door to great political development of destiny in the Egyptian political society. President Mubarak not being a candidate for the presidency is not in itself sufficient for that, as opening the door requires the amendment of the Constitution. As President Mubarak said, the amendment will be in Articles 76 and 77; the latter is important and essential, not only in the elections, but also for the Egyptian regime in limiting the terms of the president to two only for every president, after that his right to be a president ends. This system will be protected by the Constitution and by various laws that make deviating from it impossible and unacceptable.

As for Article 76, it is necessary to know the extent of its amendment. I imagine that this amendment should not be made by a single side, but it requires consultations with the professors of law in Egypt. The same as we talk about the political dialogue, we talk about legal dialogue over specific points, namely the way to draft Article 76; there ought to be consensus over the legal opinion in order to make the situation clear and to avoid all kinds of tension witnessed by Egypt.

[Asharq Al-Awsat] I reiterate my question: Will you be a candidate in the elections?

[Musa] As an Egyptian citizen, I have every right to be a candidate, so have you and every Egyptian. As for the decision, I will think about it carefully in the upcoming few weeks and months.

[Asharq Al-Awsat] How do you view the demand by some people for a complete amendment of the Constitution?

[Musa] There is no time now for a complete amendment of the Constitution. In my opinion, it will be imperative to amend the Constitution at a future stage. In the long-term, I consider that Egypt needs a complete amendment of the Constitution based on the constitutions that succeeded in governing Egypt in the past, and we add to them the requirements of the modern era and the international developments of the 21 Century. Therefore, during the remaining months, we talk about a constitutional amendment that enables the political life to reach safe shores from the current political crisis, and the most important issues in this are Articles 76 and 77, and the supervision by the judiciary.

[Asharq Al-Awsat] Despite the fact that President Mubarak addressed the people twice to calm down the situation in Egypt and to put an end to the tension, the Egyptian street has become divided and the acuteness of the tension has escalated. How can we put an end to this critical situation?

[Musa] My fear is that we enter a state of confusion, ambiguity, and lack of certainty, and hence what has happened will be repeated within months, and in a more acute way; this is in addition to the reputation of Egypt, and the great negative impact on it. Therefore, we ought to identify the landmarks, as the president will leave on a specific date, namely October or November 2011. Therefore, we ought to prepare the arena for these amendments to prepare for the elections and for a political arena that produces those who are suitable to assume the post of president. I have great confidence in the Egyptian society that can produce personalities capable of reaching the seat of government. We need this period for political and legal dialogue in order to draw up the draft of these important articles of the Constitution.

[Asharq Al-Awsat] Let me go back to ask you about the means to put an end to the tension in the light of the pledge to come out in a second Friday of anger, and the divisions introduced into the Egyptian street?

[Musa] We should not push the situation toward tension, because the message was very strong and completely clear.

[Asharq Al-Awsat] By whom?

[Musa] The youths’ message has been extremely strong, and it has been heard as proved by the clear evidence of the magnitude of what Mubarak has offered the people. Even partisan life might proceed in a better direction. Also the voice of the masses has a great echo in expressing the Egyptian mood, which was not felt by the political class. I have expressed this clearly in my speech in Sharm al-Sheikh when I talked about the state of anger and frustration, and when I warned against a state of anger.

[Asharq Al-Awsat] But the state of anger within every Egyptian house is even greater than what is in the Egyptian street and Al-Tahrir Square, especially as there are gangs that threaten the security of every Egyptian citizen. What do you think of this?

[Musa] I consider that the Egyptian people have been able to protect themselves by themselves. They have succeeded in this in a marvelous way everywhere. This has led to the creation of nightly political forums, the establishment of a dialogue over why we have reached this, the search for the causes of all that Egypt is going through now, the discussion of the state of Egypt, and the discussion of the causes of the collapse. Everybody is participating, the rich, the poor, and all the classes of the Egyptian society. Everybody insists on arriving in Al-Tahrir Square to express the state that Egypt has reached.

[Asharq Al-Awsat] What is your role in the current stage? Will you sponsor some kind of dialogue between the protesters in Al-Tahrir Square and the state in order to convince them of the importance of the transitional stage?

[Musa] I can contribute to some extent, but I cannot impose myself on anyone. I have not been invited, and no one has invited me to engage in a dialogue. The second issue is that my term as Arab League secretary general will end within months or weeks, and the logic of the situation now calls on me to leave this post in order to have more freedom, and to act as an ordinary Egyptian citizen.

[Asharq Al-Awsat] How do you see the Arab stance toward what is taking place in Egypt?

[Asharq Al-Awsat] What are your apprehensions, and what are the red lines that ought not to be touched?

[Musa] First, there were red lines, but unfortunately they have been encroached upon, namely the sabotage operations of which I call on the youths to beware. This is the first point. The second point is the story of the disappearance of the police from the streets, while their duties include the protection of the properties and the citizens. Where have the police gone? This is a very grave issue, and a red line that has been crossed. Here, we have to salute the army that has stood serenely, organized the march of the masses, and announced officially that the army supports the legitimate demands expressed by the people.

[Asharq Al-Awsat] What are your apprehensions in the current stage?

[Musa] Egypt will be exposed to a very severe disturbance if there is confusion.

[Asharq Al-Awsat] What do you mean by confusion?

[Musa] Losing confidence in the reforms, losing credibility among the sides, and whether the Egyptian People’s Assembly will be able to discuss all the amendments and ratify them?

[Asharq Al-Awsat] Indeed, where are the guarantees for implementing the reforms?

[Asharq Al-Awsat] But, do you expect the worst scenario, especially after a new Friday anger?

[Musa] Let us wait and see on Friday. However, as long as the message has been heard, we ought to crystallize the collection of reforms through dialogue with the youths and all sectors of the Egyptian society. We want a road map for the upcoming stage, which has to be agreed, according to which work has to be done from the beginning of February until the beginning of November.

[Asharq Al-Awsat] The parties and the youths have rejected the dialogue, and stipulated conditions?

[Musa] We need dialogue and the presence of arbiters for mediation.

[Asharq Al-Awsat] Who do you nominate as candidates for the committee of arbiters?

[Musa] There are many suitable names, and I know that there are many meetings among the politicians and university professors.

[Asharq Al-Awsat] The youths demonstrating in Al-Tahrir Square have invited you to join them. Will you respond to this invitation?

[Musa] I have met some of them, and they have asked me to be a candidate for the presidency.

[Asharq Al-Awsat] Have the sensitivity and embarrassment when your name comes up as a possible candidate for the presidency disappeared?

[Musa] Previously we were talking from the angle of looking into the future, or from a theoretical or political angle. Now, we are talking while we are facing mass demonstrations, and a clear expression of the Egyptian public opinion, and while we have steps that have to be taken.

[Asharq Al-Awsat] How do you assess the US stance toward the crisis?

[Asharq Al-Awsat] Have there been contacts between you and the military institution?

[Musa] No, there have been greetings. I have been happy with the civilized and honorable way the military institution behaves.

[Asharq Al-Awsat] I beg your pardon; I do not understand the meaning of greetings?

[Musa] I mean that I salute them; not only for their stance and the way they behave in the street, but also for what the army spokesman has said that he respects the demands of the demonstrators. However, if you are talking about direct contacts with the army, this has not happened.

[Musa] No, no contact has taken place between us, neither was I consulted.

[Asharq Al-Awsat] But the current dialogue involves parties that do not enjoy high regard by the Egyptian man in the street, neither does he know them?

[Musa] Perhaps now he (Maj-Gen Omar Suleiman) is contacting the official opposition powers. Through the media I have been watching his contacts, and I am watching their reactions. First let us hope and work to have an official and national dialogue with all the political powers, a meaningful dialogue whose aim is to agree on the upcoming stage.

[Asharq Al-Awsat] How do you see the stances of the Arab countries toward the situation in Egypt?

[Musa] Naturally they all are stances of interest, following up, and worry.

[Asharq Al-Awsat] Will there be an Arab reflection of what is taking place in Cairo?

[Musa] I cannot say that; however, some opinions say that there will be a quick reflection.

[Asharq Al-Awsat] Some people have put forward the concept of conspiracy to explain what is taking place?

[Musa] Not everything is a conspiracy. This theory is not valid in this case. These demonstrations have their causes and justifications, as you, I, and everybody know.

[Asharq Al-Awsat] Are we now afraid and weeping over the ruins?

[Musa] We beseech God to guide Egypt. Ultimately Egypt is protected by God, and we hope that all this will end in a good way.