‘One million march’ builds in Cairo 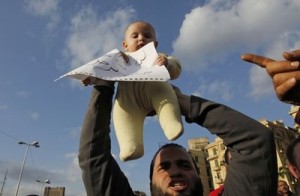 Hosni Mubarak’s 30-year regime in Egypt looked increasingly fragile on Tuesday as massive crowds flooded into central Cairo for what organisers have labelled a million-strong march to oust their ruler.

On a critical day in the Arab world’s most populous country, the mood among the demonstrators was euphoric in spite of an extremely heavy military presence.The protesters, both men and women, appeared to be drawn from all walks of Egyptian life, classes and age groups.

The dramatic show of people power is designed to force Mr Mubarak to relinquish power immediately.

Their demand was bolstered by Mohamed ElBaradei, the Nobel laureate and democracy campaigner who has become one of the leading figures of the protest movement, calling for Mr Mubarak to resign on Tuesday.

He told Al Arabiya television that the president’s departure would save lives and that the military’s announcement on Monday recognising the demonstrators’ “legitimacy” and promising not to use force to crush the protests had emboldened the demonstrators.

Opposition groups have dismissed Mr Mubarak’s apparent concessions, including a new cabinet that excludes allies of his son and presumed heir Gamal and an offer of dialogue that came on Sunday night from Omar Suleiman, the chief of intelligence appointed as vice president on the weekend.

At entrances to Tahrir Square, the gathering point in the capital, young men held up signs saying “One million march. 10am. Down with Mubarak”.

It was not clear where the marchers would go and the protest appeared to lack coordination. A presidential palace in the north of the city on the airport road was one rumoured destination but that is several kilometres from the city centre.

The protesters were making their way into the city of some 15m people despite most train and inter-city bus services being cancelled.

The expanded military presence was typified by the rings of armoured personnel carriers around the main television building, a major strategic site on the banks of the Nile

While Mr Suleiman said on Monday he had been asked to start dialogue with “all political forces” – including on constitutional and legislative reform, a key demand of protestors – political groups said they wanted to speak directly to the army, which they now consider the only legitimate force within the regime.

“The armed forces will not resort to use of force against our great people. Your armed forces, who are aware of the legitimacy of your demands and are keen to assume their responsibility in protecting the nation and the citizens, affirm that freedom of expression through peaceful means is guaranteed to everybody,” said the statement.

It urged people not resort to acts of sabotage that violated security and destroyed property, warning that it would not allow outlaws to loot, attack and “terrorise citizens”.

Egypt’s turmoil has raised fears over the possible disruption to oil supplies through the Suez canal, through which much of Middle East oil flows, briefly drove up benchmark Brent prices above $101 a barrel for the first time since September 2008. Early in London on Tuesday, the March contract was at $101.28.

The US, which is Egypt’s biggest aid donor, said Frank Wisner, its former ambassador to the country, was in Cairo and “has the ability” to talk to Egyptian leaders. FT