Jordanian activists rallied outside government offices on Saturday as they tried to step up their campaign to force Prime Minister Samir Rifai to step down. 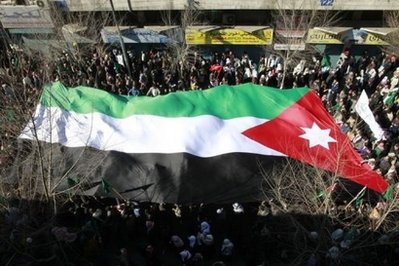 Inspired by unrest in Tunisia and elsewhere in the region, about 200 Jordanians gathered outside the prime minister’s office shouting “Our government is a bunch of thieves” and holding banners reading “No to poverty or hunger”.

“We call for the overthrow of this government that has destroyed the poor. This government should be for all Jordanians not just the rich.”

Jordan is struggling with its worst economic downturn in decades. The government has announced measures to cut prices of essentials, create jobs and raise salaries of civil servants.

Protesters say the moves do not go far enough and have staged rallies calling for the reversal of free-market reforms which many blame for a widening gap between rich and poor.

Protesters say the sale of state assets to foreign investors over the past decade has enriched the country’s business and political elite but has done little to help the poor.

“We want a special court that will put on trial all those who sold the property of the Jordanian people …,” Sunaid said.

Others have called for constitutional reforms to curb the extensive power of the king who appoints cabinets, approves legislation and can dissolve parliament.

“We hope that citizens will be able to chose the government that represents them …,” said Ali Dalain, an activist and former deputy from the southern city of Karak.

Unlike Tunis or Egypt, the Jordanian state has long focused its economic drive and budget money on developing rural areas.

But discontent has grown nonetheless as the economic downturn weakened the state’s ability to create jobs in the public sector which has traditionally absorbed poor tribesmen in rural areas. Reuters