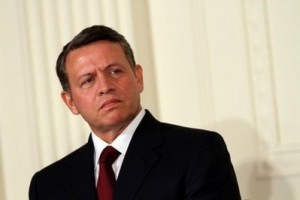 King Abdullah II of Jordan fired his Cabinet on Tuesday and ordered his new prime minister to pursue political reforms to “correct the mistakes of the past” following massive anti-government protests around the Arab world and smaller demonstrations at home.

The new government of Prime Minister Marouf Bakhit was told to take “practical, swift and tangible steps to launch a real political reform process, in line with the king’s vision of comprehensive reform, modernization and development,” according to a statement carried by the state-owned Petra news agency.

Jordanians have taken to the streets in recent weeks demanding the government respond to popular concerns over unemployment and corruption. Their demands have been markedly more modest than those of their Tunisian and Egyptian counterparts, who called for a complete regime change.

Get dispatches from Times correspondents around the globe delivered to your inbox with our daily World newsletter. Sign up »

A Jordanian analyst said the Cabinet change was unlikely to satisfy frustrated Jordanians who had been demanding fresh faces. Bahkit served as premier from 2005 to 2007.

“A measure like today’s measure will increase anger, not defuse it, because people will believe they are not being taken seriously,” said Labib Kamhawi, an economist and political analyst. “This is a cosmetic measure. The government itself does not initiate policies, it only implements them, so the Cabinet change does not mean anything.”

Abdullah’s decision coincided with a massive demonstration in Cairo’s Tahrir Square demanding that Egyptian President Hosni Mubarak, a close ally of the Jordanian monarch, step down after 30 years in power. The uprising in Egypt follows a successful protest movement in Tunisia that ousted President Zine el Abidine Ben Ali on Jan. 14. Over the last few weeks, demonstrations also have erupted in Yemen, Algeria, Libya and Sudan. There also have been calls for protests this weekend in Syria.

Abdullah likely has been keeping a close eye on events in Tunisia and Egypt, but the level of anger in the streets of Jordan does not seem to have reached a boiling point. The Jordanian grievances have been aimed for the most part at Prime Minister Samir Rifai, who was replaced by Bakhit on Tuesday.

Even the Islamic Action Front, Jordan’s main opposition group and a branch of the Muslim Brotherhood, has denounced the kind of regime change being called for in Egypt.

The group’s secretary general, Hamzah Mansour, said the meeting was “the beginning of a dialogue” with the government.

“There is no comparison between Egypt and Jordan,” Mansour told Agence France-Presse on Monday. “The people there demand a regime change, but here we ask for political reforms and an elected government.”

“We recognize and acknowledge the legitimacy of the Hashemites,” Mansour said, referring to the ruling family.