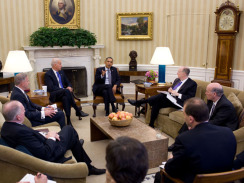 The United States sends roughly $1.5 billion per year to Egypt, which the U.S. considers an ally. At least $1.3 billion of that comes in military aid, according to the State Department.

Gibbs said told reporters today that he was not offering a warning to Egypt but was stating that the United States is monitoring events and will consider how the situation plays out in assessing its posture in the future. “Violence in any form should stop immediately, and grievances should be addressed,” he said.

Asked specifically if the U.S. will cut off aid to Egypt, Gibbs responded, “I think at this point I will leave it to the fact that we are watching very closely the images and events that you’re watching and how that could very possibly impact our assistance to Egypt.”

“Our belief is, it is important to have those conversations very directly with those leaders,” he said. “If you walk away from the table of engagement, you can’t deliver that message in a face-to-face manner, and the president believes obviously that is tremendously important.”

The Associated Press reported Friday that an unnamed administration official said the administration was planning to review U.S. aid to Egypt. Egypt was the fourth biggest recipient of aid from the United States in 2010, after Afghanistan, Pakistan and Israel.

Members of the Obama administration, including President Obama and Secretary of State Hillary Clinton, have called on Egypt to refrain from using violence against the protesters calling for an end to the authoritarian government of Hosni Mubarak. They have also said that the United States sees Egypt as an ally and called on the protesters to refrain from violence.

The White House appears concerned that if Mubarak is forced out it could destabilize Egypt and potentially the region overall. It is urging the Egyptian leaders to reform certain institutions and make the country more democratic in response to the protests.

Clinton, like other administration officials, has called on “the Egyptian authorities not to prevent peaceful protests nor block communications, including on social media sites.” The Internet has reportedly been effectively shut down in the country, in an apparent effort to complicate the protesters’ organizational efforts.

The grievances of the Egyptian people, Gibbs said Friday, “have reached a boiling point and they have to be addressed.” CBS