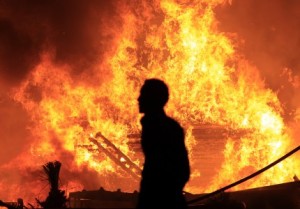 When watching the riots in Tunisia and Egypt, the question on everyone’s mind is, what outcome will these organic and popular uprisings will produce?

The world may be witnessing a new dawn in the Middle East fostered by enlightenment or a new Egyptian government trailing behind Syria as the latest conquest the Mullahs of Iran can claim is the result of their wise policies.

With Hezbollah’s latest dismantlement of a Lebanese government, aided by the complicity of the Assad regime and an Egypt whose future remains uncertain, it is essential for US and European policy makers to view Syria as a clear and present danger rather than the country stabilizing the region. No matter what happens, Egypt is a changed country. If it falls in the “L” column, Syria and Iran will play an essential role in supplying Egypt, as they did to Hezbollah, with the necessary tools to destabilize North Africa. This outcome will place a heavy military burden on Israel, the result of which may engulf the region with intermittent wars for many years to come.

As the world watches images of Egypt erupting, similar images are being reproduced in Syria. We have witnessed today many demonstrations in Damascus, Aleppo, and Qamoshli. With 10,000 IRGC (the Army of the Guardians of the Islamic Revolution) personnel residing permanently in Syria, we also witnessed them, mixed with Syrian Army Battalions, deploy in several cities around the country. Yet, the international media, and al-Jazeera especially, have gone dark on Syria.

Instead of supporting a similar organic uprising by a people whose 65% of its citizens were born enslaved living in total misery, the world seems oblivious to the pain Assad inflicts on our people. I believe this is a major mistake. One that Syrians, Israelis, Lebanese, and Americans will pay a dear price for.

With Syria becoming free and falling into the hands of its people, a major supply line to Hezbollah and possibly Egypt will be disrupted. The fall of Syria might also save Egypt from a possible takeover by the Mullahs. This scenario is basked in pessimism but when was the last time the west received good news from the Middle East?

Al-Hurra, a US-funded TV station, has been slow in responding to any threats affecting the Syrian regime. Why? Because planted within its Virginia offices are sympathizers and supporters of Assad and Hezbollah. The last time al-Hurra broadcasted a negative story on Syria was in 2005 due to pressure from the Bush administration.

If al-Hurra covers the demonstrations happening in Damascus, it will encourage Syrians to rise against Assad. And while many pundits and experts will capitalize on Assad’s propaganda that his alternatives are hardcore Islamists, the reality is that Syrians are mostly secular people. The Syrian Muslim Brotherhood cannot possibly muster more than 10% of the votes but the mere thought that some analyst could be wrong has frozen our intellect to the point where we view Assad’s evil as a stabilizing factor. The question becomes: Are you really willing to bet Egypt on Assad’s stability? The time has come for true leadership in the region.

By Farid Ghadry, a Syrian-American who co-founded the Reform Party of Syria (RPS) dedicated to freedom and human rights in his native country, blogs at ghadry.com. The opinions expressed are his own. Reuters