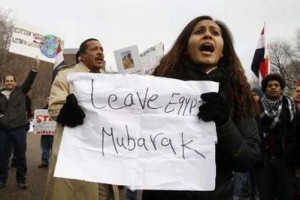 Embattled President Hosni Mubarak has appeared on television for the first time since protests erupted and said that he won’t step down and has asked his Cabinet to resign and vowed to press ahead with social, economic and political reforms.

He called the anti-government protests as part of plot to destabilize Egypt and destroy the legitimacy of his regime.

He defended the security forces’ crackdown on protesters.

he said he listens to the people’s pulse, but this must be done by dialogue

He said he is for a free and democratic Egypt

Protesters have seized the streets of Cairo, battling police with stones and firebombs, burning down the ruling party headquarters, and defying a night curfew enforced by a military deployment. It is the peak of unrest posing the most dire threat to Mubarak in his three decades of authoritarian rule.