Egypt: Revolution? By Whom? For What? 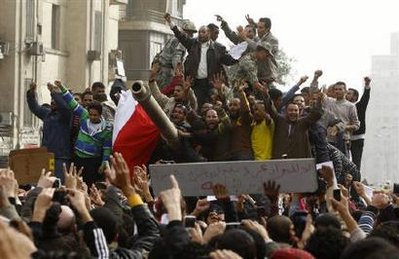 As I’ve remarked in the past–but you can’t say the truth too often, right? — nobody knows what a revolution looks like. And in fact that last clause may be very misleading, because there is no one thing that a revolution looks like. Some revolutions happen very quietly, like the Information Revolution. On the other hand, some very revolutionary-looking events, like lots of people in the streets calling for the downfall of a government or a regime, are just street theater. Ask the “revolutionaries” who filled the streets of Paris calling for the end of de Gaulle. Or the crowd that levitated the Pentagon.

You can’t judge a revolution by its theatrics. Something real has to happen, something beyond marching, chanting slogans, and making demands. Revolutions end systems of rule and replace them with new ones. Is that happening now in the Middle East? I think that the Green Movement in Iran is revolutionary, and that, if successful, it would end the Islamic Republic and replace it with a secular political system that separates mosque and state. I think that the efforts by Hezbollah to take over Lebanon also constitute an attempt at revolutionary change, because it would turn the secular Lebanese system into an Islamic Republic. It can go both ways.

All of which is a long way of saying that there’s a lot of tumult in the Middle East (and not only the Middle East; there were big demonstrations a few hours ago in Albania), a great perturbation in the Force, as Obiwan would say. Lots of fighting. Lots of factions. In Egypt, which is by far the most important of the Arab countries affected by the tumult, there are genuine democrats and also members of organizations (from the Muslim Brotherhood to Islamic Jihad, Hamas, et al.) who would transform Egypt from an authoritarian to a totalitarian regime.

Remember my Grandma Mashe: “Things are never so bad they can’t get worse.”

So how are we to look at it all?

The basic point is that most everything and everywhere is up for grabs. From Yemen to Iran to Lebanon and Somalia, from Egypt and Jordan to Syria and Tunisia, we’ve got tumult. There are lots of different forces in play, and in many cases there is no way to know who will make what decisions, let alone what decisions they will make. Orders will be given, some of them will be obeyed while others will be ignored.

Welcome to the real world.

Let’s take the most important Arab country, Egypt. The key institution is the army, which does not want an Islamic regime, but also does not want Mubarak fils. I suspect that if they agree to save the current regime (likely), they will want to inherit it. They remember that the shah’s generals made a deal with the forces of Khomeini’s revolution in 1979, and were decimated. But even if they prevail and put an end to the tumult, how long would that “order” last? That may depend on other things in other lands.

The key to many of these tumults — certainly not all, for example, Tunisia — is Iran. The mullahs have been pounding their chests and claiming to have inspired the insurrections. Everywhere. This is nonsense and they know it. Few Jordanians or Egyptians want to live in the Arab version of the Islamic Republic of Iran. Indeed, you can be sure that the mullahs are frightened by a lot of this. They know that the Iranian insurrection of 2009-2010 was the real inspiration for many of the demonstrators, and they know that the Iranian people know that, as they also know that Iranians are saying to themselves that “if the Arabs can overthrow their regimes, surely we (superior Persians) can do the same.” That is why the thugs were out in force in Iran’s big cities the last couple of days.

It follows that the Iranians will — probably have already — mobilize their terror army against Mubarak, as against the Jordanian monarchy, and for the tyrants in Khartoum. They are good at manipulating Arabs (when’s the last time you saw a Persian suicide terrorist? They’re all Arabs manipulated by the Persians) and the Iranians’ religious proxies and self-starting fellow travelers and useful idiots in Sunniland will be calling for mass martyrdom. Nobody knows how this will play out. Not even the mullahs. Everyone’s in a big hurry, and lots of mistakes will be made.

And what about us? We are supposed to be the revolutionaries, and we must support democratic revolution against tyranny. But we must not support phony democrats, and for the president to say “Egypt’s destiny will be determined by the Egyptian people,” or “everyone wants to be free” is silly and dangerous. Egypt’s destiny will be determined by a fight among Egyptian people, some of whom wish to be free and others who wish to install a tyranny worse than Mubarak’s. That’s the opposite of freedom. Think about the free elections in Gaza that brought the Hamas killers to power. For that matter, think about Khomeini, viewed at the time as a progressive democrat by many of the leading intellectual and political lights of the West, from Foucault to Andrew Young.

We should have been pressuring the friendly tyrants in the Middle East to liberalize their polities lo these many years. We should have done it in the shah’s Iran, and in Mubarak’s Egypt, and in Ben Ali’s Tunisia. It is possible to move peacefully from dictatorship to democracy (think Taiwan. Think Chile. Think South Africa). But we didn’t, in part because of the racist stereotype that goes under the label “the Arab street,” according to which the Arab masses are motivated above all by an unrelenting rage at Israel for its oppression of the beloved Palestinians. That myth went along with another: the belief that the culture of the Arab world (sometimes expanded to “the culture of the Muslim world”) was totally resistant to democracy. The tumult has nothing to do with Palestine/Israel and even a blind bat can see hundreds of thousands of Arabs fighting for democracy, as have their fellow Muslims in Iran.

We shoulda, coulda done better all along. But here we are. It’s quite clear that Obama is totally bamboozled. He has no culture to deal with this situation, nor does Hillary. I wonder about Panetta. Does the intelligence community have people who know in detail who is who in the tumults? Historically we haven’t been great at this — the intelligence failures at the time of the Iranian revolution could fill a fat volume, with another needed to chronicle the failures during the following 31 years — but we’ve got a lot of Arabists and we may be lucky enough to have a few very good ones.

If we do, and if Panetta and General Clapper know who they are, then we can try to pick and choose, supporting real democrats and thwarting the likes of al Baradei, the love child of both the Muslim Brotherhood and the Tehran crowd. Surely we know who he is. We should broadcast it.

We have to play this game. Let’s hope there’s someone who can grab the president’s ears and explain the rules and the players. But the winning gambit — finally support democratic revolution in Iran — isn’t even being discussed. Paradoxically, this is a very good moment to endorse the Green Movement. I mean, if we’re going to praise the Tunisian and Egyptian freedom fighters, all the more reason to hail the true martyrs in Iran, currently being slaughtered in the country’s prisons at the blood-curdling rate of three per day. And that’s only the officially acknowledged executions.

So, having failed to do what we should have done for the past many decades, we should stick to what got us here: support democratic revolution. But not false revolutionaries. Remember Grandma.

And this is not a time for dawdling. Faster, Please!