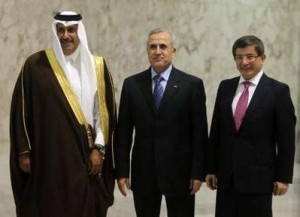 Foreign ministers from Turkey and Qatar have suspended efforts to mediate Lebanon’s political crisis after two days of intensive talks with rival parties that failed to clinch a breakthrough.

Their departure from Lebanon on Thursday comes one day after Saudi Arabia also decided to pull out as a mediator from the talks.

Ahmet Davutoglu, the Turkish foreign minister, and his Qatari counterpart, Sheikh Hamad bin Jassem bin Jaber al-Thani, said in a statement released overnight that they were leaving Lebanon after a working draft to break the impasse between Saad Hariri, Lebanon’s caretaker prime minister, and Hezbollah was met with “reservations”.

Our “efforts resulted in a working draft that takes into account political and legal demands to resolve the current crisis in Lebanon based on the Syrian-Saudi initiative,” the statement said.

“But given certain reservations, [we] decided to suspend efforts in Lebanon for the time being and to leave Beirut in order to consult with [our] leadership.”

The Syrian-Saudi initiative reportedly calls for Lebanon to disavow a UN tribunal probing the 2005 assassination of Rafiq Hariri, the former prime minister, against guarantees from Hezbollah concerning its weapons arsenal.

The initiative also calls for guarantees concerning the functioning of state institutions.

“There’s a lot of fear in this country that without some sort of agreement, the situation could spiral out of control and we’ve seen that happen in the past.

“When the Lebanese woke up this morning and heard that the Qatari and Turkish mediation efforts have now been suspended just after the Saudis washed their hands from the bargaining – it raised a lot of fears,” our correspondent said.

Before opting out of the talks, Saud al-Faisal, Saudi Arabia’s foreign minister, warned of a dangerous situation that could lead to the partitioning of the country in which Christians and Muslims share power. The warning came a week after Hezbollah decided to pull out from the Lebanese government.

Atef Majdalani, an MP with Hariri’s parliamentary majority, said he believes the latest developments indicate that Hezbollah planned to resort to military action to impose its agenda.

“As far as I am concerned what is happening means that Hezbollah has decided to resort to military action and to pursue the coup it launched by withdrawing its ministers from the government last week,” Majdalani told the AFP news agency.

Mahmoud Ahmadinejad, the Iranian president, weighed in on the political crisis during a speech in Iran a day earlier.

He warned Israel, the US and some European nations on Wednesday to stop their “sedition” in Lebanon or the people there would “chop” their hands.

“You are on a rough downhill path that will take you into a deep valley and your actions show that your decline is on a fast track,” Ahmadinejad told a cheering crowd in the city of Yazd in a speech broadcast live on state television.

“With these actions, you are damaging your reputation. Stop your interference. If you don’t stop your sedition [in Lebanon], then the Lebanese nation and regional countries will cut your nasty, plotting hand.”

Meanwhile, Michel Aoun, a Christian leader who belongs to Lebanon’s opposition camp, also conveyed a message to the United States, a country which the opposition blames for trying to sow civil strife in Lebanon, our correspondent in Beirut said.

“He said Lebanon is too big to be small and too small to be partitioned.”

According to Lebanon’s power-sharing system, the president must be a Christian Maronite, the prime minister a Sunni Muslim and the parliament speaker a Shia Muslim.

Each faith makes up about a third of Lebanon’s population of four million.

Hariri, a Sunni, is backed by Western powers, including the US, while Hezbollah is supported by Iran and by neighbouring Syria.

In May 2008, armed supporters of Hezbollah took over parts of Beirut after the government shut down its private telecommunications network and stepped up its control at the airport.

Dozens of people were killed in fighting across the country.Aljazeera