Erdogan: Lebanon not allowed to be driven back to instability 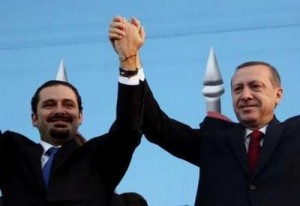 Turkish Prime Minister Recep Tayyip Erdogan said Lebanon can not be allowed to be driven back to instability, when its people have not even fully recovered from the great pains and destruction it has suffered in 2006.

In his address to a meeting of the ruling Justice and Development Party Friday in Ankara, Erdogan urged all related parties to step up efforts to deal with the crisis which emerged with the resignation of 11 ministers from the Lebanese cabinet, which he said was prone to have negative ramifications for the region already destabilised with critical developments.

Lebanese Prime Minister Saad Hariri who visited Ankara, had a meeting with Erdogan, earlier on Friday. The two discussed the government crisis in Lebanon.

“All parties need to step up efforts to solve the government crisis, through democratic and pluralists methods. Parties need to hold common interests of Lebanon over any other concern, with a sense of responsibility,” said Erdogan.

He emphasized that the dispute over the conduct of the investigation into the Hariri assassination, should be handled in way to avoid conflicts inside and outside Lebanon, and free from all sorts of political concerns.

Erdogan pointed out that a just formula that is acceptable to all parties must be found adding that they way to arrive at such a solution was through dialogue and not division.

He said the Hariri report should not be allowed to ruin the progress Lebanon has recorded towards establishing peace at home and enhancing its ties with neighbours.

Erdogan called on countries in the region and the international community to work in concerted action to solve the government crisis in Lebanon. He said, Turkey, as a country which can talk to all countries in the region, would continue to extend firm support to Lebanon in establishing peace, stability and security.

He said Turkey would work with Iran, Syria and Qatar to overcome the crisis in Lebanon.