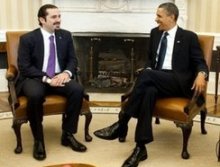 Hariri made no public comment after the Oval Office visit and immediately departed for France to consult with President Nicolas Sarkozy before returning to Beirut, according to a Lebanese official who spoke on condition of anonymity to discuss sensitive diplomatic moves.

A White House statement issued afterward said Obama had commended Hariri for his “steadfast leadership and efforts to reach peace, stability and consensus in Lebanon under difficult circumstances.”

“The efforts by the Hezbollah-led coalition to collapse the Lebanese government only demonstrate their own fear and determination to block the government’s ability to conduct its business and advance the aspirations of all of the Lebanese people,” the statement said.

The Lebanese official said Hariri was pleased with Obama’s expressions of support.

Hezbollah, which is back by Iran and Syria, has denounced the tribunal, which is widely expected to name members of Hezbollah in upcoming indictments. Many fear that implicating Hezbollah could set off sectarian tensions that have plagued the tiny Middle Eastern country for decades.

During the meeting with Hariri, the White House said Obama also stressed the importance of the tribunal’s work as a “means to help end the era of political assassinations with impunity in Lebanon.” He and Hariri discussed efforts with France, Saudi Arabia and other international and regional partners to maintain calm and ensure that the tribunal’s work continues without third-party interference.

They also agreed that all involved parties should avoid threats or actions that could cause instability. AP