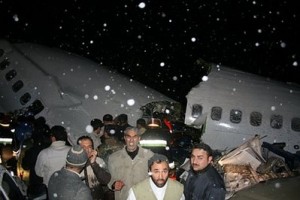 Iran has begun an investigation into a passenger plane crash in the north-west of the country which killed at least 77 people.

The IranAir Boeing 727, which was carrying 104 people, was flying from Tehran when it came down and broke into pieces near the city of Orumiyeh.

Two people are reportedly still missing, while at least 26 people were injured, some critically.

The accident is the latest in a series of air crashes in Iran in recent years.

Reports suggest the aircraft was delivered to IranAir in 1974 and was the oldest passenger aircraft operating in the country.

It crashed near the city at around 1945 local time (1615 GMT) on Sunday, according to Iranian state television’s website.

Ahmad Majidi, the head of the road and transport ministry’s crisis panel, told ISNA news agency that it appeared that bad weather was the cause of the crash.

“Based on the evidence, the plane’s captain could not land at Orumiyeh airport due to bad weather conditions and he decided to return (to Tehran),” he said.

“But for unknown reasons the plane crashed around five miles (8km) from the airport.”

“We do not know if the two missing are among the fuselage’s debris, or in hospital, or dead. We will find out about them today,” he added.

An official for the Iranian Red Crescent, Mahmoud Mozaffar, said the plane had broken into several pieces, but there was no explosion or fire.

Iranian TV footage showed the plane lying broken apart in a field as rescue workers and locals searched for survivors in snowy weather. Some corpses were seen covered in blankets near the wreckage.

The head of Iran’s emergency services, Gholam Reza Masoumi, told Fars that rescue work was made more difficult by heavy snow, which was around 70cm (27in) deep around the crash site.

There have been a number of accidents involving Iranian planes in recent years.

The last major crash was in July 2009, when a plane caught fire mid-air and crashed in northern Iran, killing 168 people.

In 2003 an Iranian troop carrier crashed in the south-east, killing all 302 soldiers and crew on board.

Iran’s civil fleet is made up of planes in poor condition due to their age and lack of maintenance.

“The plane was given to Iran in 1974 and at that time it was a second-hand,” ISNA news agency said.

The country has been under international sanctions for years, making it much more difficult to buy new aircraft or spare parts from the West.

July 2009: At least 168 die after a flight from Tehran to Armenia catches fire mid-air and crashes

December 2005: At least 128 people die after an Iranian military aircraft crashes into a 10-storey building

February 2003 : An Iranian troop carrier crashes in south-east, killing all 302 people on board

February 2002: Another AirTour Tupolev crashes near the western city of Khorramabad, killing 118