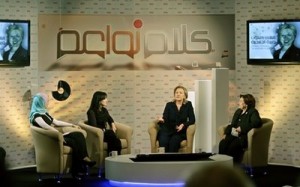 During the taping of a television talk show on Monday in Abu Dhabi , US Secretary of State Hillary Clinton expressed concern over attempts to “destabilize” Lebanon amid tensions linked to the UN probe into the 2005 murder of former Prime Minister Rafik Hariri.

“I’m deeply worried about the efforts to destabilize Lebanon,” Clinton said when asked by an interviewer about the political crisis in Lebanon and concerns of war.

“We should do everything we can to make sure those warnings are not accurate,” Clinton said, when asked to comment on warnings of a regional conflict.

During the flight from New York to Abu Dhabi she was asked about her meeting with Hariri and here is what she was quoted as saying:

“I had a – what I thought of a substantive and reassuring meeting with Prime Minister Hariri. I was impressed by his resolve and his understanding of the very difficult situation in which his country finds itself. We obviously, as you know, have been constant in our commitment to the tribunal and to the fundamental principle that Lebanon’s sovereignty and independence must be respected, and that is why we’re working hard with Saudi Arabia, France, and Egypt to form a strong foundation of support for Lebanon and, in particular, Prime Minister Hariri. So I thought it was a very positive discussion.”