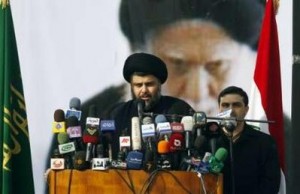 By ANTHONY SHADID,  NAJAF, Iraq – To a rapturous welcome that conflated the religious and political, the populist Iraqi cleric Moktada al-Sadr delivered his support Saturday for an Iraqi state that he had once derided as a traitorous tool of the United States and that his followers had battled in the streets of Iraq’s most important cities only a few years before.

The brief speech to thousands of followers was his first since returning this week after more than three years of voluntary exile in Iran, and across the country, many had watched it for signs of a movement that portrays itself today as a far more disciplined, mature heir to the group that surged on the scene after the American invasion in 2003. His political allies and Mahdi Army militia raucously articulated the voice of the urban poor, fighting the American military and then engaging in some of the worst sectarian carnage of the civil war.

Delivered in a warren of streets near Mr. Sadr’s home in this sacred city, the speech marked yet another, halting step into Iraq’s mainstream by a movement that fashions itself as the permanent face of opposition, even though its ministers and deputies fill the ranks of the government.

And as the movement is prone to do, Mr. Sadr again sought to have it both ways in the 28-minute address, calling for the expulsion of American troops but giving time for a withdrawal and offering support for a government his followers underpin but making his backing conditional on that government’s effectiveness.

“We are with it, not against it,” said a grayer Mr. Sadr, who spoke forcefully and deliberately, if occasionally testily, with a confidence he once lacked. “The government is new, and we have to open the way for it to prove it will serve Iraq’s people.”

Rowdy, and at times ecstatic, a crowd stretching down the street to the turquoise-domed mosque of Kamil bin Zayid answered Mr. Sadr with chants of fealty. Some cried uncontrollably. Others, dangling from electricity pylons, thrust their fists into the air.

“Yes, yes, to his excellency, the leader!” they shouted.

Scion of one of Iraq’s most prominent religion families, who inherited a grass-roots movement founded by his revered father in the 1990s, Mr. Sadr is perhaps the sole national figure who can compete with the prominence of Prime Minister Nouri Kamal al-Maliki. So far, their relationship has proven tumultuous, from allies to enemies to allies again, and Mr. Sadr’s speech outlined the pivots on which their relationship may turn.

In the clearest terms, he insisted no American troops could remain by 2012, as required by agreement, and urged his followers to persist in resistance by any means to their presence. More cautiously, he suggested he could withdraw their support for Mr. Maliki if the government fails to address the most basic complaints of daily life here, particularly for the disenfranchised he claims to represent — shoddy roads, dirty water, leaking sewage and, that motif of post-Saddam Hussein Iraq, persistent blackouts.

But Mr. Sadr urged patience from his followers, and at the very least, his words seemed to mean Mr. Maliki’s new government would have a grace period to act.

“We haven’t put a deadline on the government,” said Hazem al-Araji, a prominent lieutenant of Mr. Sadr’s. “We’re watching how it progresses, and after that we’ll decide.”

The occasion itself was street theater, bringing together all the divergent currents that shape a movement many believe could transform Iraqi politics. On stage was the movement’s essence, from the resonant, centuries-old symbolism of Shiite sacrifice and martyrdom to a martial culture made possible by the American invasion and occupation.

Since reaching its nadir in 2008, after Mr. Maliki sent the Iraqi army against its militia in Baghdad and southernmost Basra, with decisive help from the American military, the movement has returned to prominence, essentially by staking its claim to Iraqi politics. It scored success in local elections in 2009. The next year, Mr. Sadr, who had long hedged his support for elections, called on his supporters from exile to fully participate in the vote last March. They did, and in a feat of logistics and planning, the movement won 40 seats, emerging as a savvy player in eight months of negotiations. Their eventual support for Mr. Maliki was the key to his return for a second term.

At Saturday’s speech, the movement sought to convey a certain respectability, from sharply dressed security in gray suits to the punctuality of Mr. Sadr himself, whose speech began precisely at a scheduled 10 a.m. Cadres passed out Iraqi flags, soon overwhelming the crowd’s pious banners and portraits of Mr. Sadr. In fact, it was hard not to draw at least superficial comparisons to another Arab Shiite movement, Lebanon’s Hezbollah, both of whom navigate political, social and military identities and have built personality cults around their leaders, junior clerics more prominent as politicians.

There were even echoes between Mr. Sadr and Hezbollah’s leader, Hassan Nasrallah, though Mr. Nasrallah remains, by far, the more dynamic and eloquent. It was there in the mannerisms, the way each held a white handkerchief or excused himself to drink a glass of water. Each related to their audience the same way, too — speaking in a stentorian formal Arabic, only to lapse into slang when offering a joke or a casual aside.

“What’s up? Are you scared of the Americans?” Mr. Sadr asked the crowd from a 25-foot-high pulpit, draped in black, as he led them in a chant of “No, no to America.”

“You’re getting better,” he complimented them, with the wryest of smiles.

Most comparisons to Hezbollah go only so far, though, and many Sadrist officials point out the obvious: Just as Hezbollah was impossible without Israel’s 1982 invasion of Lebanon, so is Sadr’s movement without the assassination of his father on Saddam’s orders in 1999 and the American invasion and occupation four years later.

“We are a movement, we are not simply a party,” said Hakim al-Zamili, a Sadrist lawmaker who beat charges of murder, kidnapping and corruption from his time as an official in the Ministry of Health and who joined other Sadr officials at the event.

With that ambiguity, Mr. Zamili captured what many see as Mr. Sadr’s challenge: turning a street movement into a political group, without surrendering the legions of supporters from hard-scrabble neighborhoods, so zealous that some tried to stampede the stage.

Mr. Sadr’s speeches offered few clues Saturday, going little beyond the reflexive nationalism and millenarian theology that has long served as the movement’s rallying cries. Nor did his lieutenants, some of whom volunteered a contradictory notion of being inside the government, while looking out and, from there, looking back in at its performance.

“We’ll be watching them,” said Nassar al-Rubaie, himself the minister of labor and social affairs. “We’ll monitor the performance of this government.” NYT