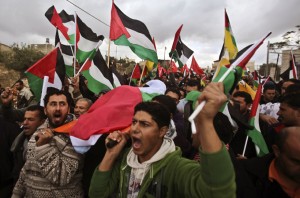 Hundreds of Palestinians and anti-barrier activists have attended the funeral procession of a Palestinian protester who died after inhaling the gas fired by Israeli forces quelling a protest in the occupied West Bank.

Mourners at the funeral on Saturday blamed the Israeli military for the protester’s death.

“What happened yesterday, there were too many forces from the occupation, guarding the apartheid wall, and they started shooting, so many, so many gas (canisters) mixed with smelly water. And this large amount of gas caused many protesters a feeling of suffocation, and it killed Jawaher Abu Rahme. And immediately we moved her to the Palestinian medical centre,” said family member Rateb Abu Rahme.

“This death was caused by their brutality, by the fact that they are using tear gas that was banned in Europe in the 60s and 70s, because it is lethal. But here, on Palestinians, they continue using it,” said anti-barrier activist Jonathan Pollak.

Jawaher Abu Rahme’s brother Bassem, in his 20s, was killed in 2009 after a tear gas canister

struck him in the chest.

Mohammad Eidi, head of emergency at Ramallah Hospital, told the Reuters news agency in a phone conversation that Abu Rahme had arrived there on Friday with very weak breathing as a result of inhaling a gas.

The doctor added that the type of gas is still not identified.

The Israeli army said on Friday troops had employed riot dispersal means against stone throwers. A military spokesman, reached by telephone on Saturday, had no immediate comment.

Israel Radio, quoting Palestinian sources, said Israeli troops had fired an unusual amount of tear gas at dozens of demonstrators during a weekly protest against the barrier Palestinians in Bilin say cuts them off from some of their land.

The Israeli report, quoting an unidentified military source, said Abu Rahme had been treated in hospital after suffering a light injury and sent home on Friday. Eidi, asked about the report, denied she had been released from hospital.

Israel started building the barrier of wire fences and cement walls in the West Bank in 2004.

Israel says this is a security measure to prevent suicide bombers from reaching its cities after hundreds were killed as a result of such conflict.

But conflict has been on the rise along Israel’s border with Hamas-ruled Gaza, where armed groups have been firing rockets at Israeli towns and Israel has responded with

US brokered peace talks between the Palestinians and Israel collapsed late last year in a dispute over Jewish settlement building in land Palestinians seek for a state.

Abbas urged Western leaders in a speech on Friday to come up with a new peace plan in hopes that diplomacy may be revived. aljazeera