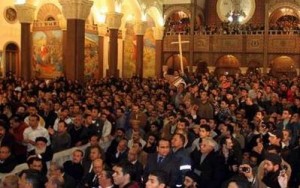 The suicide attack in Alexandrai that struck Coptic Christian worshippers as they were leaving midnight mass about 30 minutes into the new year has outraged the Lebanese.

21 people died in the country’s worst sectarian violence in a decade and 97 people were injured.

According to a statement issued by his office, Suleiman said that the perpetrators behind the attack aim at inciting sectarian strife in Egypt.

I stress to you that Lebanon stands by Egypt in overcoming the repercussions of the Alexandria attack and confronting terrorism in all its forms. The statement quoted Suleiman as telling Mubarak

Prime Minister Saad Hariri sent a telegram to the Egyptian President condemning the “terrorist attack that targeted The Saints church in Alexandria”.

According to a statement issued by the PM’s press office on Saturday, Hariri called for an Arab action that unites stances and considers any attack on co-existence between Christians and Muslims an attack on Arab national security.

The PM offered his condolences to the victims, and voiced hope that God protects Egypt and its people.

Berri called the act “a terrorist behavior that aims at raising concerns and destabilizing the situation in the region, which serves Israel’s projects,” National News Agency (NNA) reported.

“We are certain that this act will deepen Egyptian unity.” He said

Former Prime Minister and Lebanon First parliamentary bloc leader MP Fouad Siniora said there is a scheme that aims to target co-existence between Muslims and Christians in the Arab region.

Siniora condemned the bombing according to a statement issued by his press office.

“Those who stand behind such bombings] will fail to achieve their aims…”, the statement added.

Former president and Phalange Party leader Amin Gemayel said on Sunday that the security of Christians in Arab countries is the responsibility of Muslims.

Gemayel urged Arab leaders on Sunday to confront attacks against Christians in the Middle East with all possible means.

Gemayel condemned the bombing that struck Alexandria on Saturday, according to a statement issued by his press office.

He called on the Lebanese to be aware of this “phenomena”, and added that the obstruction policy in the cabinet will lead to destruction.

Former Prime Minister and Lebanon First parliamentary bloc leader MP Fouad Siniora said there is a scheme that aims to target co-existence between Muslims and Christians in the Arab region.

Siniora condemned the bombing according to a statement issued by his press office.

“Those who stand behind such bombings] will fail to achieve their aims…”, the statement added.

Al-Jamaa al-Islamiya issued a statement on Sunday condemning all bombings that target civilians in any place in the world, particularly places of worship.

“The terrorist attack in Alexandria is a crime that aims to harm co-existence between Christians and Muslims and cause sectarian strife,” the statement added.

Egyptian newspapers warned on Sunday that “civil war” could break out unless Christians and Muslims close ranks after the deadly attack on a Coptic church that triggered angry protests.

Protests by Christians and clashes with the police that erupted after Saturday’s attack could worsen and plunge Egypt into a new spiral of sectarian violence, the government and independent newspapers said.

The papers also urged the government to give serious consideration to the plight of the Copts who account for up to 10 percent of Egypt’s 80-million population and often complain of discrimination.

“Someone wants to make this country explode… We must realize that there is a plot aimed at triggering religious civil war,” the pro-government daily Rose el-Yussef said.

Egyptians should foil attempts by “terrorists” to strike at the country, it said.

The independent paper Al-Shorouk said Christians had a right to be angry, but urged them not play into the game of “the instigators of Saturday’s crime.”

The bombing sparked anger among Christians, who clashed on Saturday for several hours with police and shouted slogans against the regime of President Hosni Mubarak.

“Oh Mubarak, the heart of the Copts is on fire,” protesters shouted as they darted in and out of side-streets around the bloodied church to shower police with stones. Police fired tear gas grenades at the demonstrators.

The attack, which Mubarak has blamed on “foreign hands,” drew international condemnation with Pope Benedict XVI leading the fray on Saturday urging world leaders to defend Christians against abuse.