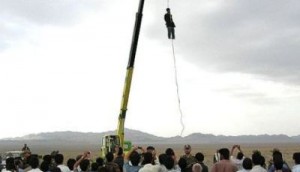 An Iranian convicted of spying for the Israeli intelligence agency Mossad was hanged in Tehran Tuesday, Iranian officials said.

Ali Akbar Siadat was accused of sending classified information to Tel Aviv and received $60,000 in payment for his work, the Iranian Student News Agency said Tuesday.

Siadat, under the guise of a businessman, maintained contact with Israeli embassies in the region and met Mossad agents in hotels and other public places in Turkey, Thailand and Holland, the Iranian Ahlul Bayt News Agency said.

He was accused of dispatching classified information on Iran’s military as well as photos of sensitive sites to Israel.

Siadat was arrested with his wife in 2008 while trying to flee Iran. He allegedly had in his possession 29 pages of top secret material when he was detained, the news agency said.

Iran said Siadat was hanged along with Ali Saremi, a member of the Mujahedin-e Khaloq terrorist group in Tehran’s Evin Prison at dawn Tuesday. UPI