Geagea: Gone are the days of threats over STL indictment 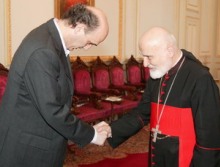 Lebanese Forces leader Samir Geagea praised the way president handled the vote on the so called “false witnesses” during the last cabinet meeting :

Following his Tuesday meeting with Maronite Patriarch Nasrallah Boutros Sfeir in Bkirki he told the media :

“We feel that the president is bearing proper responsibility for the first time in 20 years,” in reference to Suleiman’s recent on comments on the “false witnesses” issue.

During an interview with As-Safir newspaper published on Monday, Suleiman said “I do not accept anyone setting time frames for me to secure consensus in the cabinet and obliging me to put any issue up for a vote.”

“President Michel Suleiman is acting responsibly in his handling of the current Lebanese impasse, Geagea said

“Through which logic do we obstruct the national dialogue in Lebanon and say we are waiting for the Saudi-Syrian” initiative? He added : “with what logic do Lebanese parties throw their problems on foreign states and expect a solution from nowhere ?”

In response to the threats over STL indictment , Geagea said:

” Gone are the days of threats over the Special Tribunal for Lebanon (STL) indictment… The international community rejects these threats and the Lebanese people reject attempts to tamper with the country’s security.”

I do not have any information about the date of the issuance of the STL’s [upcoming] indictment.”

In response to a question about the STL indictment Geagea said: “I do not have any information about the date of the issuance of the STL’s indictment…and added” I was personally expecting the prosecutor to refer the indictment to the pre-trial judge before the holidays but that didn’t happen.”

The LF leader called on the Lebanese to commit to state institutions.

Geagea’s comments come after the Free Patriotic Movement launched an attack against president Suleiman over the vote on the so called “false witnesses” issue.