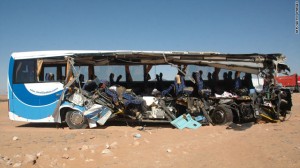 Eight American tourists — six women and two men — were killed in a traffic accident Sunday while on a tour bus in Aswan, Egypt, the country’s interior ministry said.

A total of 116 American tourists were traveling in three tour buses. The interior ministry said the middle bus — carrying 37 of the tourists — crashed into a parked dump truck loaded with sand.

Video of the crash site showed one side of the bus completely sheared off, with some seats dangling from the vehicle’s shell. Dried blood could be seen on some of the crumpled wreckage.

Aswan is a popular tourist site in Egypt located about 1,000 kilometers (621 miles) away from Cairo.

The U.S. Embassy in Cairo issued a statement Sunday saying it was “deeply saddened” by the accident.

“The embassy has confirmed that the injured are being moved by military transport to Cairo, and has mobilized staff to identify and to assist those Americans involved,” the statement said. “Consular services will be provided to assist any American citizens who have been affected and their families, in coordination with the Egyptian government.”

Embassy staff members in Egypt are available for questions or concerns.They can be reached in Cairo at 011 202 2797 3300.