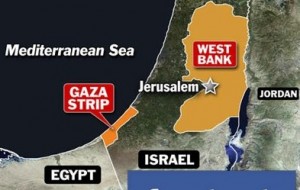 Ecuador is the latest country to recognize an independent Palestinian state.

The government said on Friday that President Rafael Correa recognized “the Palestine State as free and independent within its borders since 1967.”

Others countries — such as Brazil, Argentina and Uruguay — recently made the same move. These diplomatic initiatives come after the breakdown of direct peace talks between Israel and the Palestinians.

Palestinians have been seeking international recognition of an independent state, a strategy to achieve statehood outside the framework of talks with Israel.

“Sadly, the Middle East continues to face wars and violent events that have led to the death of many innocent people, a situation contrary to the humane and pacifist position established by the Ecuadorian Constitution. This recognition is meant to reinforce the valid and legitimate wish of the Palestine people to have their own free and independent state,” the Ecuadorian government said.

Ecuador said the acknowledgment of such a state has been legitimized by U.N. Security Council resolutions, numbers 242 and 338, and an Arab peace initiative adopted in the 2002 Beirut Summit.

The recognition of an independent Palestine, the government said, “will be fundamental to achieve the peaceful co-existence of the nations in the region through dialogue and mediation.”

In a realted development the Palestinian National Authority (PNA) said Sunday that Paraguay plans to recognize an independent Palestinian state next year.

Paraguay’s Foreign Minister Hector Lacognata told the Palestinian ambassador to Paraguay that his country will recognize the Palestinian state on the lands that Israel has occupied in 1967 in the spring, the Palestinian foreign ministry said in a statement.

By recognizing the Palestinian state, Paraguay joins several Latin America countries, including Brazil, Argentina, Ecuador and Uruguay, in doing so.

Israel and the United States consider the Palestinian efforts to gain recognition from the United Nations as “unilateral” steps and insist that any Palestinian state should come through negotiations with Israel.