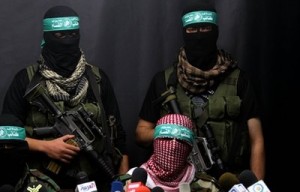 Hamas has warned that it would escalate hostilities against Israel unless tensions along the Gaza-Israel border were defused.

Abu Obeida, the group’s spokesman said on Saturday that they would respond aggressively to Israeli attacks, adding that Israel was “playing with fire”.

Tensions have risen along the border in recent days. Over the last week, fighters in Gaza fired 30 rockets into southern Israel, with the Israeli army hitting back by launching multiple air raids aimed at what they identified as Hamas facilities.

The rocket attacks wounded a 15-year-old girl, while the air raids killed a Palestinian and wounded several others.

Early on Saturday, Israel bombed what the military termed a Gaza “terror training facility” and a “weapons smuggling tunnel” under the Gaza-Egypt border. Hamas said there were no casualties.

In a statement to mark the 23rd anniversary of the founding of Hamas, Dief said in a statement: “You [Israel] are going to disappear. No matter how long it takes … we will not raise the white flag to you as long as there is one Muslim on this planet.”

The Israeli military refused to comment on either Hamas statement.

The sudden surge in violence along the Israel-Gaza border has prompted fears from many that Israel may mount another invasion of the territory. Two years ago, Israel invaded Gaza over the issue of rocket attacks into Israeli territory.

At least 1,400 Palestinians were killed during the three-week-war, including hundreds of civilians.

Israel holds Hamas responsible for all violence toward Israel from Gaza, though the rocket fire has also been carried out by other radical groups.

Deif is on Israel’s most wanted list for his alleged role in planning suicide bomb attacks that have killed Israelis. He has been severely wounded twice in Israeli assassination attempts and lives in hiding.